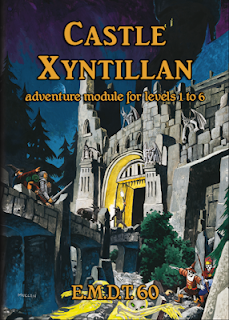 I'm borrowing the following from Rob Conley's Bat in the Attic Blog:

This begins with a story, back in the 2000's a bunch of folks were organized by Necromancer Games to flesh out Judges Guild's Wilderlands of High Fantasy. The project took a lot of work but finally saw the light of day.

One of the author involved was Gabor Lux (also known as Melan).

So as a follow up to the Wilderlands one of the project Necromancer Games was planning on was Tegel Manor and Gabor Lux was tapped as the author. We all knew him from his blog and other writings and was excited about seeing his take on the venerable adventure from Judges Guild.

But alas it was not to be.

Instead, we now have Gabor Lux's take on what might have been, a haunted castle reimagined. With maps by none other than Rob Conley himself.


“The immense, rambling complex of Castle Xyntillan has stood in its mountain valley for many years. Built over several generations, it has now been deserted by its former owners, and left to time and the elements. However, that is not the end of the story, for Xyntillan’s fabulous treasures and Machiavellian deathtraps continue to fascinate the fortune-seekers of a dozen lands – and never mind the ghost stories!”

A 132-page hardcover describing the three massive levels of the eponymous funhouse megadungeon, Castle Xyntillan has been designed for the Swords&Wizardry game, and is suitable for 1st to 6th level characters. Built on surrealism and dream logic, Castle Xyntillan has been designed to be versatile, open-ended, complex, and accessible - and always a bit mysterious. From the soaring tower of the Donjon to the inky depths of the Oubliette (and beyond), this module should provide ample opportunities for exploration, confrontation, and subterfuge. Whether you would like a dungeon for one-off expeditions and convention play, or repeated forays and full campaigns, this book should suit the demands of your campaign!

Please note that your print order also makes you eligible for a free copy of the PDF edition, published a few months after the print version. PDFs will be delivered via DriveThruRPG to your regular e-mail address, unless you request otherwise.

You can grab a copy for 40 bucks plus shipping here