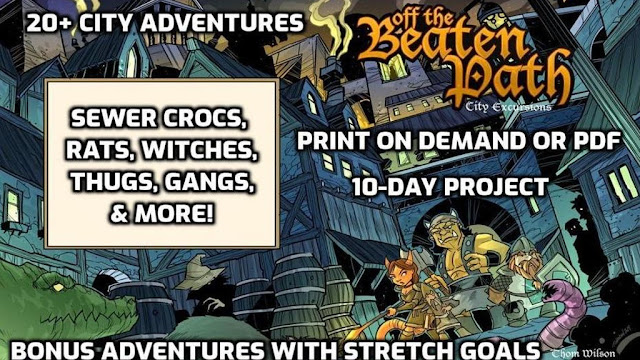 "A minimum 26-page book, filled with one- to two-page adventures usable by any system. Based on the Patreon project by Nomad Gaming."

The "Excursions" series of projects by Thom Wilson are some of the most useful campaign supplements for fantasy gaming one is going to find. A number of short yet expandable adventures in each release, perfect for throwing at your party when you, as the DM, aren't as prepared as you had hoped to be. Off the Beaten Path, City Excursions is the latest in the series.


A  minimum of twenty single- or double-page city excursions to use  as side quests or stand-alone adventures for your Fantasy RPG. There  are over twenty-five pages of encounters to be found within cities and towns. As your players' characters travel through large settlements, they will come across gangs, sewer creatures, evil warlords, basement baddies, and more! These adventures are a great way to  add additional encounters during travel or to handle an unexpected change in direction!

Six bucks for the PDF in either System Neutral or Swords & Wizardry, Ten for both PDFs or ten for POD coupon. 14 for POD coupon plus digital.

Email ThisBlogThis!Share to TwitterShare to FacebookShare to Pinterest
Labels: kickstarter, off the beaten path, Swords and Wizardry, system neutral