Time for some OSR Picks for the DTRPG Christmas in July Sale. In no particular order:

Low Fantasy Gaming Deluxe Edition - I played the LFG Original (free) for a number of sessions and it was a blast. Very much and OSR feel while borrowing some mechanics and concepts from Dungeons & Dragons 5e. "Low Fantasy Gaming is a tabletop RPG built for gritty adventures in low
or moderate magic settings. It has simple rules, dangerous combat, flexible PC customization, and mysterious, unpredictable magic. Designed for
short, episodic adventures in sandbox worlds, LFG provides the mechanics and tables needed for easy GM improvisation. It’s a heady mix of the best old school, modern, and new game design, wrapped around a familiar d20 core." 20  15 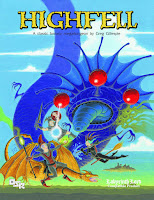 HighFell: The Drifting Dungeon - the latest release from Greg Gillespie. Remember, he doesn't just design mega-dungeons, he teaches it on the college level. Must be a Canadian thing ;) "The HighFell: The Drifting Dungeon is a 246-page classic old school megadungeon for use with Labyrinth LordTM and other fantasy role-playing games. The pages of HighFell are crammed full with new material, maps, amazing art (including special surprizes by former TSR artists), as well as an amazing colour cover art by Ex-TSR artist Erol Otus that matches Barrowmaze Complete and The Forbidden Caverns of Archaia as a sister-books. HighFell: The Drifting Dungeon will keep your players on their toes and your campaign going strong for years. HighFell is brought to you by the Old School Renaissance (so don’t forget your 10’ pole)." 35  25.45

The Shadow of Golgotha (B/X) - Nice! A Whitcher styled setting for the OSR. "Get ready for OSR gothic fantasy in the style of Castlevania, Vampire Hunter D, and The Witcher! The Machines conquered us. The Vampires saved us. Now all Christendom lies under their rule. In the gothic future of The Shadow of Golgotha, the vampire scions of Christ have carved up the known world amongst themselves. Their nobility and Church rain down prosperity, for the small price of hot red blood. But the forests and moors are still haunted by gruesome creatures, from clockwork mutants to Death Herself. Lady Regina Drake and the Ruby Paladin grapple for power in the heartland, while Mother Medusa and her anchoresses plot their heresies on the frontiers. Now is the time for bastard children, defrocked nuns, and gasoline witches to
make their mark, to solve the murders of monks and sack crimson cathedrals, to explore Earth's longest nights beneath... The Shadow of Golgotha! This book includes: A
complete gothic fantasy setting. 32 monsters with special abilities, crit effects, and rumor tables. Detailed tools to randomly generate settlements, including regions, landmarks, troubles, and quirky inhabitants." 9.99  7.49 The Stygian Library - somehow this Platinum Best Seller has escaped my radar before now. Looks like I'll need to snag a copy. "The Stygian Library is a creepily genteel dungeon set in an infinite extradimensional library. Each expedition generates its route as it explores, resulting in new locations being discovered with every visit. Included within: Systems for generating locations within the library, including Entrance Foyers, Map Galleries, Tea Rooms,  Planetariums, Calculation Engines, Phantom Databanks, Paper Beehives, Phantom Pumps, Jarred Brains and the Sheol Computer. 40 monsters tailored to the Library, including Lantern Bearers, Skeleton Crew, Origami Golems, Guardian Shades, Lost Souls, Ink Elementals, Animate Spells, Archivist-Liches, Infernal Merchants, Escaped Fictions, Educated Rodents, Conceptual Wells and the orders of Librarians themselves. A system for searching for specific knowledge within the library's depths, as well as 30 unusual books and the secret knowledge they contain. Tables for generating treasure, dreams, rumors, and various other useful details. A unique class of Mummified Sages, post-human academics who've dwelled in the Library for decades or more.  It's a big spooky library full of dangerous knowledge, spiritual automata, and ghost-fueled computers." 5  3.75

DARK PLACES & DEMOGORGONS - Survive This!! - Core Rule Book OSR RPG - You got your Stranger Things in my OSR! - "Following in the tradition of SURVIVE THIS!! Zombies! comes SURVIVE THIS!! Dark Places & Demogorgons, a tabletop roleplaying game that uses the Original 1970s Fantasy Roleplaying game rules but mutates it into this retro nightmare. It’s sleek, slender and creepy as Hell. In Dark Places & Demogorgons, you play as high school students during the early 1980s. The town you live in has had a rash of disappearances and strange happenings. The adults seem lost as what to do, the police are as clueless as ever and aren’t helping and Reverend Phillips is on another witch-hunt. It’s up to you and your friends to figure out what’s going on and stop it from happening again!" 7.99  5.99