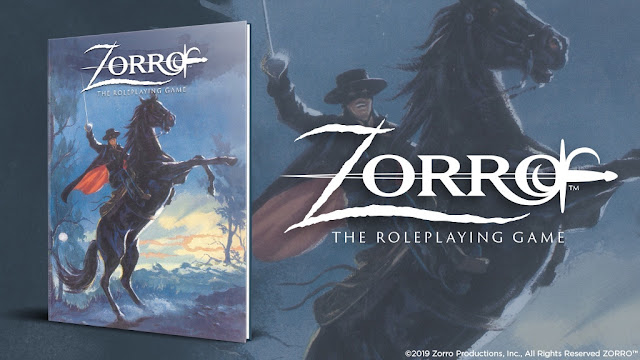 I'm not sure which is drawing my attention more - the fact that Gallant Knight Games has a license to publish a Zorro RPG via Kickstarter or that West End Games has a second edition of its d6 system. Fun times. Fun times indeed.

Zorro, the classic hero of the American Southwest, comes to the tabletop in a full-color, 8.5 x 11 sized book.

The book will detail the setting of Zorro's adventures in Alta California, as well as providing rules to emulate the swashbuckling, dramatic action of this masked hero of the people.

Players will be able to work alongside Zorro as part of Zorro's Legion, or even take on the role of the legendary hero!

The book is being created under license from Zorro Productions, Inc., and has access to over 70 years of Zorro history, artwork, media and research to power it!

More than an RPG, this book will also contain detailed accounts of Zorro's adventures through media, from his original novel appearances, to blockbuster movies and TV series. While there is more media than a single book can contain, with our partners at ZPI, we've selected the highlights and essentials of Zorro's career, and turned those into scenarios, adventures and more!

The book will be lavishly illustrated with art culled from the entire history of Zorro.

Then there is this tidbit:


West End Games is an iconic company in the RPG industry creating classic roleplaying games that powered a wide range of universes and properties! Working with West End Games to utilize the D6 System to power such an iconic hero as Zorro only makes sense!

To that end, in partnership with Nocturnal Media & West End Games, Gallant Knight Games has been empowered to bring a brand new edition of the classic D6 System to the tabletop! Fully licensed, and the next step in the D6 family, WEG D6 2e updates the D6 System to contemporary advances in game design.

Throughout the Kickstarter, we'll be previewing the new mechanics (and you can find some previews on our website right now). We'll have more details about the new D6 2e System and its future throughout the campaign!

Yes, the update to the D6 System really has me excited:


Classic D6 System features like:
All still exist and play important roles (and rolls!) in WEG D6 2e. Updates and changes have been made to streamline the game, with some features such as:
Our goal is to produce a ruleset that is intimately familiar, but fresh and exciting! WEG D6 2e has been in playtesting for 6 months, and has logged over 300 hours of play already! We're committed to doing this right.

And of course, the icing on the cake for me is the first stretch goal:


At $20,000 we unlock an all-new Adventure to be written and included in the book. This will be a 5,000 word adventure, written by industry veteran James Michael Spahn.

This will be added to the core book for all backers.

I'm in. Let's see where I see the sweet spot:

Alright. 60 bucks gives you the book in print, the book in PDF and all unlocked PDF stretch goals. That's where I jumped in at.