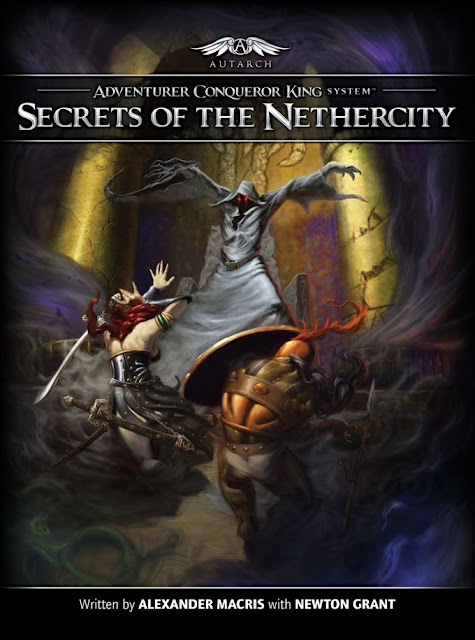 I've slowly been playing catch up after NTRPG Con. Didn't help that my desktop's hard drive was failing before the con and I had to replace the computer on Friday (and had to reschedule the recording of the return of... yeah, let's get that recorded before I mention it) Then my smartphone died. Yep, it's been that kind of week.

Just trying to explain why, being that I have an unformatted word document of Secrets of the Nethercity, I won't be referring to the document with this post. I will get to it, hopefully over the next few days. When I've read it I'll post a follow-up.

So, let's peek at Secrets of the Nethercity. It includes the following:

The Nethercity is bigger than an ordinary dungeon (like Sinister Stone of Sakkara) but not as big as a megadungeon (like Dwimmmermount). Get it? Kilo instead of mega... Let's just read on.

What are the price points?

40 gives POD at cost coupons for both books, PDFs of both books AND and early access playtester version of the PDF.

I think I'll be in for 40 bucks. There are other levels with many other goodies, but 40 is my sweet spot.