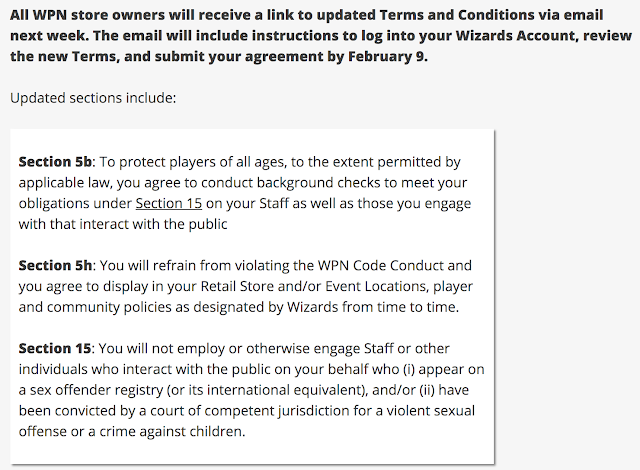 So, that post from the weekend here at The Tavern talking about how stores can protect your children while they participate in the hobby, a post that I made due to a story circulating in social media. Well, it looks like the story that was circulating got Wizards to do something. WPN is Wizards Play Network.


Recently, a few former judges and players had their sex offender registries posted to social media. In accordance with our policy, the majority had already had their access to Magic organized play suspended indefinitely, and are not active in the Magic community.

We learned, however, that an individual reported to the Judge Conduct Committee was inadvertently not decertified by Magic Judges nor reported to Wizards. You can read more about that here. However, once this was brought to our attention, Wizards immediately coordinated with Magic Judges—an independent community-run organization that operates and manages the judge community and its Judge Conduct Committee—to address the situation. That individual has now been indefinitely suspended as a player and the Magic Judges decertified the individual’s status as a Magic judge. When Wizards learns that a DCI member or a Wizards Play Network (WPN) retailer is on a sex offender registry, we take immediate action to remove them from organized play and our promotional programs. We have a zero-tolerance policy. Sex offenders have no place in the Magic community.

As part of our commitment to safe and inclusive spaces, tournament organizers and retailers will be explicitly required to conduct background checks for all staff (as permitted by applicable law). This includes CFB Events' Grand Prix, local store events like Friday Night Magic, and professional events like the Pro Tour and World Magic Cup as well as convention play run by Wizards.

We remain committed to working with tournament organizers, local game stores, and the Magic community to foster safe and inclusive environments. The proper channels for reporting misconduct are as follows: report judge misconduct to the Judge Conduct Committee at magicjudgefeedback@gmail.com, and retailer or player misconduct to investigations@wizards.com.

I give Wizards credit for getting ahead of the narrative in this situation. Ir can only make gaming a safer environment for all.
Posted by Tenkar at 6:16 PM