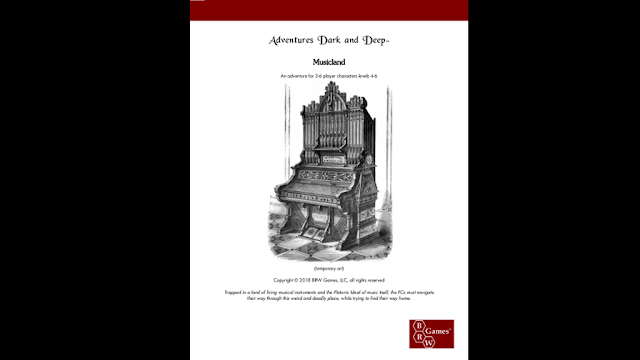 Its time to catch up on some Kickstarters, both old and new (or a bit of both)

Castle of the Mad Archmage: Musicland is the latest Kickstarter by +Joseph Bloch . Technically an add on or expansion to CotMA it should be playable as a stand alone adventure, simply because its a parallel dimension. Makes me think of some classic Gygax adventures. Imagine that...

Already at 4 times its funding goal in just over a week, all physical copies are accounted for. Yep, you read that right. There were 99 limited print copies and they've all been pledged for.

5 bucks gets you Musicland in PDF. 30 bucks gets you the PDF bundle that includes all of the Castle of the Mad Archmage releases - including this one.

I had a blast running the original CotMA megadungeon with my "B-Team". We never finished it but that seems par for the course with my gaming groups, but thats okay. Its the journey, not the destination that matters most.


This is the third expansion to the Castle of the Mad Archmage megadungeon adventure. In this adventure, the characters are catapulted to a parallel dimension called Musicland where musical instruments are alive, people speak in musical notes, and the King of Instruments produces melodies that embody the Platonic ideal of music itself.

Not only will the adventurers need to navigate this strange and deadly place, but they will need to figure out a way home, as well. But where there is great peril, there is always promise of great reward, and treasures both mundane and magical await those who enter Musicland.

Written for Adventures Dark & Deep, Musicland should play well with most any OSR ruleset. We used Swords & Wizardry Complete with CotMA and it was seamless.

Alright, expect some Folio when I awake in the morning...
Posted by Tenkar at 12:02 AM