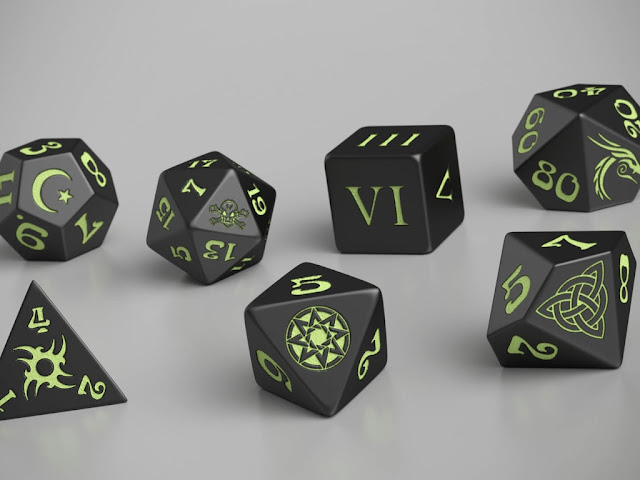 A tip of the hat to +Jennifer Fuss over at the Kicksnarker Community, because this is pure gold.

Yes, a Custom RPG Dice Kickstarter, but the twist is - you don't get to customize them! Nope. It's been done for you to save the stress.

Ah shit, let me just post the project text and make my comments. Do you really want to waste your time going to the actual Kickstarter page?


So I discuss a lot of this in the video (there is no video - oopsie!), but I wanted to talk about this more in depth here. These dice were originally an idea to help get my name out there in the dice/pen&paper rpg community (uhm, you do that by being part of that community) so that when I launched a game I intend to release, people are more willing to pledge to such a big project. (because they'll surely see my design skills with these dice) See my logic was people are more likely to pledge a large project(not saying this one is exactly small but the game will be about 5 to 7x this cost) if they can see you have successfully created a project before. Thus this idea was born. (right. so, the Algerian Flag was the inspiration for the 12 sided die? )

Now the project has undergone several attempts (two canceled and one fail to fund - say what?) and revisions due to customer base trying to help get this project where it needs to be in terms of cost and currently...this is about the best I can do on pricing. Why is this the best? Well here is my expense break down: The dice themselves require 100 sets at $22.00 to purchase from Q-Workshop (so I could buy from them direct and actually get what I want?) who i have supplied the designs to. Shipping them TO ME is about $81.00 shipping the 100 sets out is around $250.00. So we have $2200.00+$81.00+$250=around $2531.00 if my math is correct which is not factoring in International shipping which is around...oh $6.00 and some change.So let's look at a 50/50 split in shipping. $125 would be my local cost and intenrational (irrational shipping costs perhaps, because the numbers seem awfully low) comes to about $300 which changes it to $425 or double almost double the original shipping plan. SO let's add this extra $175 in 2531+175=$2706. So 10% of this would be $270.60 resulting in a total cost of $2976 in the event of a 50/50 split, which isn't very likely. Since last attempts had a high number of international pledgers we shall simply say around $600 for shipping as a ballpark estimate bringing us to a little over $3000 roughly after all is said and done, but that is just for the dice. My pledge levels also include special art work from the currently tabled Fated Worlds tabletop I conceived so then we have artist fees to consider and such so when all is said and done I am not really making a profit as all my funding goes to cover my expenses (I couldn't follow the math but I suspect the creator couldn't either...)

So what exactly does polyhedral dice mean? The type of dice being funded called polyhedral dice are commonly dice used in Tabletop gaming also known as pen and paper rpg. This set consists of a 20 sided die, 4 sided die, 8 sided die, 2 ten sided dice(one is a percentile die), 12 sided die, 6 sided die. (if your audience needs to ask this question, they aren't the customer you are looking for. please more along. we know someone that is going to try - again - to sell pop-o-matic dice on Kickstarter. give your money away to him)

What makes these special? These dice have numbers on them replaced with symbols, most of which were chosen at random except the d20 which replaced the 1 with a skull to represent a critical fail. The six if i can manage it will replace all numbers with symbols or if the render is chosen with numerals. (which means they will be total useless in game. Woot!)

Now for the fun part: The render I have was for my original design and several people liked it, but last try only hit about 50% of goal, so i decided to change it up a bit this time. I have a color table from Q-Workshop showing several body and numbers colors. So you will have a choice this time. I have a secondary set of symbols picked but since I cannot afford a second render($150) I am using the original render to give you an idea of what kind of quality and all we are looking at. So in this project at the end I will send out a survey asking whether the render should be made, or if a different color set and symbols should be used! If you like parts of both symbol sets, tell me which ones you like and then I will tally the results and the dice with the highest votes get made. But what if there is a tie on certain aspects? Well I shall then work to reach a middle ground and send the survey with that to see if it is yay or nay. (oh my fucking God - even f this funds it will never be completed)

I laid the foundation, but you guys get final say in this creation! Also please remember this is an all or nothing site so there is no need to cancel pledges unless you cannot afford your pledge. Below are the alternate symbols and color chart. I will also do these in updates to tidy it up a bit. (guess what. no chart either. maybe the chart and the video were too smart to stick around)

Also one final note: There will be a project for individual dice starting with the d6. After this renders set I will simply have someone draw the rough idea. These will be small projects usually around $500 maybe a bit more or less. (because more projects will give me street cred in the RPG community) They will be 50 units of the dice. However Another branch of Soulcraft Games is talking about doing this. (there's more than one branch? WTF? )  More information on this to come.

And the last reminder I wish to offer: to people thinking these dice are too expensive. This set for 1 set from Q-Workshop without a 100 set minimum is $40 a die....or $280 dollars. Just thought i should address that issue here. (okay - but it's custom FOR YOU. It's not custom made for the rest of us)

Oh One final thing, I will try to have the color chart Q-Workshop gave me up soon, I just either have to find it or request a new one (uhr?)

I am simply making dice. (actually, no you aren't. Q-Workshop is) The biggest risk here is delays with getting the dice made and art made. (which is the whole project if I'm not mistaken. Where's that street cred going to be?) After all the company making them for me are overseas. If this does occur I will try to do something to make it up to my backers and will keep you posted every step of the way. (I may back for a buck, just for the updates)