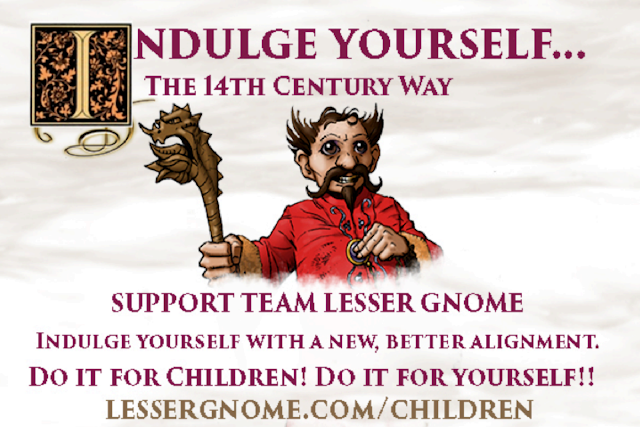 Warning, it’s Extra Life season!  Every year since 2008 gamers have been coming together for 24-hour game-a-thons to raise money for the Children’s Miracle Network Hospitals.  Although the dates are flexible, most of these happen Nov. 7—just over a month away.  The game-a-thons take all forms from online teenage videogame fests to face-to-face board game benders.  Like all a-thons, they follow the model of persons A-Y giving money to support person Z doing something that A-Y would rather not.  I first heard about Extra Life on NPC Cast, a general gaming podcast, and I thought that was a great plan—for somebody else.

Well, this year one of the players in my home gaming group challenged me to DM twenty-four hours of D&D, and to get my friend and writing partner, +Zach Glazar , to sponsor us.  Well, I tell you—Lesser Gnome is not about to be outdone by a bunch of folks holding their Wiis for 24 hours!  We are here to represent the OSR in raising money for the next generation of gamers.

On November 20th, I will be running Lesser Gnome’s latest adventure Death & Taxes for about eighteen hours with seven players.  The other six hours I’ll get a break and play in some Call of Cthulhu and a midnight special haunted dungeon delve.  But that’s not all—we are planning to broadcast the whole thing on TwitchTV.  You can get a preview from some of our actual play recordings.  And, if we get enough interest, we’ll arrange some real time feedback.  $25 for a potion of healing?  $50 and another dragon shows up?  How much for a reroll?  A critical hit?  It’s all up for grabs. Oh yeah—the best part is that we’ve arranged with a local brewery to host us.  Nothing can wrong with this plan!

One of the things that I most love about this community of old school gamers is our willingness to stand together and support each other.  So I’d like to challenge you all, as members of this great community.  Start your own Extra Life campaign and have a 24-hour game fest.  Perhaps it’s finally time to revisit Ravenloft or one of those mega dungeons you bought but have never played.  If you do, let me know, and I’ll kick in some money.  And if you don’t want to do that, be person A-Y and head over to our Extra Life site and throw some money at Team Lesser Gnome Bangor.  As I write this, our team is in the top 200 and I am just below the top 1000 individually.  I really want to see some more good old table top RPG groups in the top fifty, and frankly, if I don’t raise more money than my players, I’m gonna be in trouble.
Thanks.

P.S. I just saw that +Tim Callahan is another OSR gamer doing good on Extra Life.  I’m going to head over there a drop $20 on the man.
Posted by Tenkar at 7:44 AM