Apparently I wasn't the only one offended by the Tournament of Rapists release over the weekend. The author knew what he was doing with both his release time and description of the product - released on a Friday to ensure reactions would be over the weekend when the OBS staff are off and a description that was meant to troll as evidenced by his "just download the free preview to see what it's really about" line.

Now, if OBS couldn't address the issue right away (they first removed the Pathfinder tag and put it behind the Mature virtual wall at OBS) they probably should have avoided social media. Remember, every social media post or comment has been saved by someone, somewhere.

Jessica Price (a project manager at Paizo - her post on this matter is linked and is worthwhile reading) reached out to OBS via, of all things, Twitter. OBS's owner should never have stepped into the conversation which was, up to now, the usual customer service non answer. 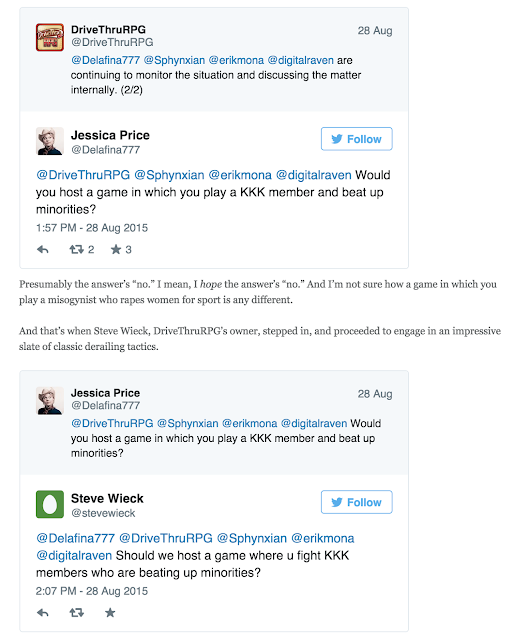 Steve, you don't mock your customers. It leave a very bad taste in their mouth. (there's more to this conversation here)

The whole situation was poorly handled by OBS, although the product in question is no longer hosted at OBS.

BTW, none of this is a free speech issue. It's a business / consumer issue. OBS can host / sell whatever they want with whatever publishers they desire. Publishers can deal with them or not (although they are the PDF / POD gorilla, and avoiding OBS is likely avoiding sales.) Consumers can shop there or not.

See, it's a free MARKET. In the end, dollars talk. I suspect it's in the best interest of OBS to get a handle on issues like this to prevent the walking away of dollars, as they gained nothing from this fiasco.

As an aside, I'm not saying Tournament of Rapists should be banned. Self publish and self distribute all you want. I personally don't feel it belongs on the OBS site.