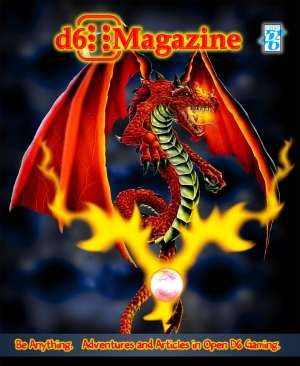 It seems like yesterday that the first issue of d6 Magazine hit the virtual news stand.  Actually, it was less then 2 weeks ago.  That's a damn nice pace.

What do you get for your FREE d6 Magazine dollars?

An excerpt from the upcoming d6 RPG: The Black Desert covering robots and androids.  Pretty useful if you are planning on running a sic-fi campaign, or even used for making golems in a fantasy setting.

Graiv's Magical Curiosities - "A shop of useless magic items".  Pretty much everything here is adaptable to an OSR game or pretty much any RPG, as the majority are stateless and systemless.

Cinnamon and the Maco - Floor plans and sats for a sic-fi spacecraft.

Broken Wand -  an adventure using the Cinema6 rules.  At about 16 pages long, it's fairly sizable, although that does include a page and a half summary of the changes Cinema6 does to the cored6 rules.

Really nice magazine.  The fact that its free makes it priceless.
Posted by Tenkar at 8:29 PM