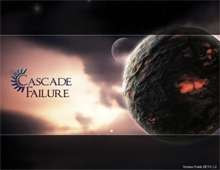 I love it when Greg - I mean the Chubby Funster Guy, puts out a new game, or releases an update to a new one.  They are always well put together and full of amazingly evocative art.  The RPG systems he designs are no slouches either.

Cascade Failure is his first RPG system to be distributed via RPGNow.  It's a post apocalyptic sic fi setting build upon the OGL.  If you are familiar with any of the OSR games out there, the basic similarities should ground you pretty well.

It's a 95 page PDF optimized for tablet and on screen reading.  It is extensively bookmarked.  There isn't an included adventure and the setting could use some fleshing out.  Hmm, maybe the Funster can put out a setting book for this... hint hint ;)

You really can't go wrong by grabbing yourself a copy.  It's free, yet better produced then most of the gaming products that put major dents in your wallet.


Cascade Failure is a post-apocalypse future RPG. Set in the aftermath of a devastating war that collapsed the interstellar economy, Cascade Failure is a survival RPG that casts the characters out into a dangerous and hostile universe. The game is built on a rugged OGL chassis that is melded with a variety of new subsystems to round out your character. You can jump into unique character classes like the Kinetic that can move objects with their mind or into a unique alien species like the insectoid Sahael with a hardened exoskeleton and powerful mandibles for biting attacks.

The Cascade Failure universe was once rich with technology and as a survivor you will struggle to bring it back online. Learn to pilot mechs, hovercraft, starfighters, foil-based watercraft, and more. Enhance your body with cybernetics or through the consumption of powerful pharmaceuticals left over from the before times. There is even a species of robotic Golems that are literally living and thinking technology.

If you enjoy the post-apocalypse genre, but tire of endless deserts and mutants, Cascade Failure can provide an alternative. Check it out! It's free!
Posted by Tenkar at 5:43 PM