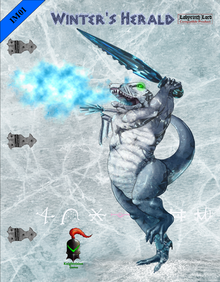 Knightvision Game is pretty much known for it's inexpensive adventures for the Labyrinth Lord RPG and Winter's Herald certainly is inexpensive at $1.99.  The question then becomes: "Is it good?"  The answer isn't so easy to find.

The hooks to get the party up north would generally have to be planted a session or two earlier, as it will probably be a trek from their normal stomping grounds.

For me, it is worth it for stealing some of the encounters for my own use, 7 new creatures for your OSR style game, rules for dealing with the extreme cold and a handful of new magic items.  YMMV.

Icemoor is a land beset by winter at the top of the world. For years at a time snow blankets the tundra, ice grips the trees, and storms batter the coast. A pale sun shines weakly on the peoples battling for survival against their foes and the very elements. An ancient menace has reared its ugly head once more and threatens the entire world with its icy grip. Can the heroes survive in a frozen landscape where villains and monsters use the extreme cold as their weapons?


Labyrinth Lord/AEC adventure for 4-6 5th level adventurers set in a arctic-like environment.
24 pages (including front and back cover)