First Look - The One Ring (LotR): Adventures over the Edge of the Wild

Cubicle 7 just released The One Ring:  Adventures Over the Edge of the Wild in PDF on RPGNow.  I suspect it has released at GenCon in print, but one of my fellow bloggers that is in attendance will need to verify that. 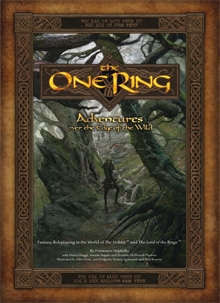 It includes an Adventurer's Book, a Loremaster's Book and maps for each.

The game uses specialized D6 and D12 dice, but it's easy enough to substitute your own (standard) dice.

One thing of note is that gameplay is divided into two phases: The Adventure Phase and the Fellowship Phase.  The Adventure Phase is what we generally do doing our RPG sessions - kill things, take their stuff, overcome problems, etc.  The Fellowship phase seems to be what most gamers would do between sessions, kinda off the grid.  I need to read further to see how these would work in play.

I've barely scratched the surface, and I still need to spend more time with The Tome of Horrors Complete for S&W ;)

Smaug has been defeated, the Battle of Five Armies has been won, and Bilbo has returned to the Shire. The War of the Ring is several generations away. In the relative peace, the Free Peoples of Wilderland look beyond their borders for the first time, establishing trade routes, renewing bonds between their cultures, and bringing prosperity to the region of northern Mirkwood, the Lonely Mountain, and the eastern slopes of the Misty Mountains.
But much danger still remains, and from the Orc-holds of the mountains to the dark and corrupt depths of Mirkwood a darkness waits, recovering its strength, laying its plans, and slowly extending its shadow . . . .
The One Ring: Adventures over the Edge of the Wild is the newest fantasy roleplaying game set in the world of The HobbitTM and The Lord of the RingsTM. It provides you with everything you need to begin your adventures in Middle-earth, including:
Adventures over the Edge of the Wild is the first core set for The One Ring roleplaying game. Set five years after the events narrated in The Hobbit, it introduces players to the world of Middle-earth focusing on Wilderland, the region visited by Bilbo in his journey to the Lonely Mountain. Future core and supplemental publications will advance the timeline and explore other areas of Middle-earth.

Email ThisBlogThis!Share to TwitterShare to FacebookShare to Pinterest
Labels: First Look, The One Ring