I'm beginning to realize I haven't played any T&T lately.  When Scott from Huge Ruined Pile was running it every other week, I kinda got my T&T fix in (even if there were sessions that not a single die was rolled - still damn fun). 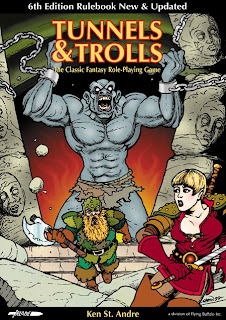 We've moved on to a house ruled OD&D game, which i expect will be just as much fun, if not more, but I do feel the lack of T&T in my (sparse) gaming diet.  I may need to break out a solo or two over the weekend.

The TrollGod has made reference in passing to HeWhOwIlLnOtBeNamed (now to be known as HWWNBN) in emails in the past few months.  It seems that much of the initial anger is gone.  HWWNBN still puts out 2 Tunnels & Trolls fanzines which are a good value for your T&T dollar if you can track them down.  They are no longer on the Verbotten list it seems.

Oh, this seems to be a "coulda woulda shoulda might been" cover for a true Tunnels & Trolls 6e rulebook.  I really like this piece of art.

edit:  Dan has pointed out that apparently issues with HWWNBN have reverted to the old ways of taking folks stuff and publishing it  w/o permission.  Ken speaks of it on the Trollhalla Walla, but I missed it as the Walla is a really unintuitive and awkward way to impart information if you don't read it constantly.
Posted by Tenkar at 5:14 PM

Email ThisBlogThis!Share to TwitterShare to FacebookShare to Pinterest
Labels: ODnD, Tunnels and Trolls