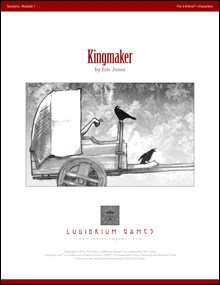 Dungeon crawls are nice and all, but an adventure that is driven by roleplay and character interaction (along with some combat - can't forget that) is comparatively rare in fantasy roleplaying.

An adventure that can kick off a campaign for first level characters, that doesn't include a single map (although it does include generic tokens for combat if desired) is a wonder to behold.

Kingmaker is all this and more.  It has a plot full of intrigue and plot twists, but it is easy from the GM to follow.  As always, I look at these adventures in terms of both D&D and converting to Tunnels & Trolls - and this could probably be converted on the fly.

"Tragedy has fallen on the Kingdom of Ambarge-the King is dead; long live the King!  But the kingdom's woes have only just begun, for the crown prince, the King's sole heir, is nowhere to be found.  The fate of their kingdom rests on the deeds of a handful of wayward pilgrims that walk a solitary road in a remote land."
Kingmaker is a single session, first-level adventure, designed to drop into any campaign. But this is not your average kobold lair. Kingmaker is an intense standoff with high stakes and tremendous repercussions as it falls to a band of first level characters to decide the fate of thousands.
Posted by Tenkar at 7:46 PM