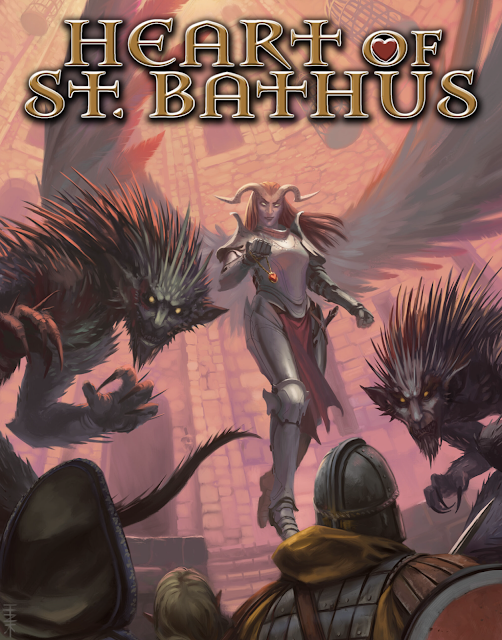 So, Frog God Games is currently Kickstarting the 5e version of Heart of St. Bathus. They are not Kickstarting the OSE version of Heart of Bathus, but instead are taking preorders, which will only be processed and charged if "there are 125 (orders) placed by Saturday, December 17, 2022. All of the extras from the KS, including Encounters in the Under Realms, will be available for purchase in the OSE version when the pre-order versions of the main book are released to pre-order customers. The OSE version will be an A5 hardcover. The add-on softcovers will be A5 and made available when the Heart of St. Bathus OSE Hardcover fulfillment occurs in one shipment."

I placed my preorder the moment I saw this on the Frog God website.

Frog God Games presents another adventure in The Lost Lands! A spiritual sequel to The Lost City of Barakus has arisen from the imagination of its author, W.D.B. Kenower. Long ago, a bold paladin sought the same glory as his celebrated ancestors, but in a moment of weakness he gave up his own soul in exchange for success in battle. He now lies suspended between life and death, and his soul is lost. It’s up to the adventurers to find it and redeem a fallen paladin while facing the wrath of a powerful demon lord in the process.

Heart of St. Bathus is a sandbox-style campaign for the Old-School Essentials Retro Adventure Game, designed to take a party of characters from Level 3 to Level 12. Answering an appeal for aid from the monks of Goodheart Abbey, the adventurers set off in search of a famed paladin’s lost soul, venturing first to a cursed fortress and then into the labyrinthine depths beneath. But it’s far from a simple mission: The soul — and the heart-shaped jewel to which it is bound — have been stolen by a cunning devil who has taken it to her citadel far below within the twisting passages of the Cyclopean Deeps. And the Heart’s true master, an imprisoned demon lord, lurks in the darkest corners of the realm, hoping to use the unwitting adventurers to aid in his escape. The soul of a brave paladin hangs in the balance as the adventurers delve into dark and unknown regions!

Purchasing this product is a pre-order of the Heart of St. Bathus adventure for the Old-School Essentials Retro Adventure Game. After the Pre-Order campaign ends, customers will receive a code allowing the purchase of the book at cost at DriveThruRPG.com. The printing of each book is currently estimated to be $27.00. Preorder customers will be paying the same or less than the book’s retail price after the Pre-Order campaign ends.