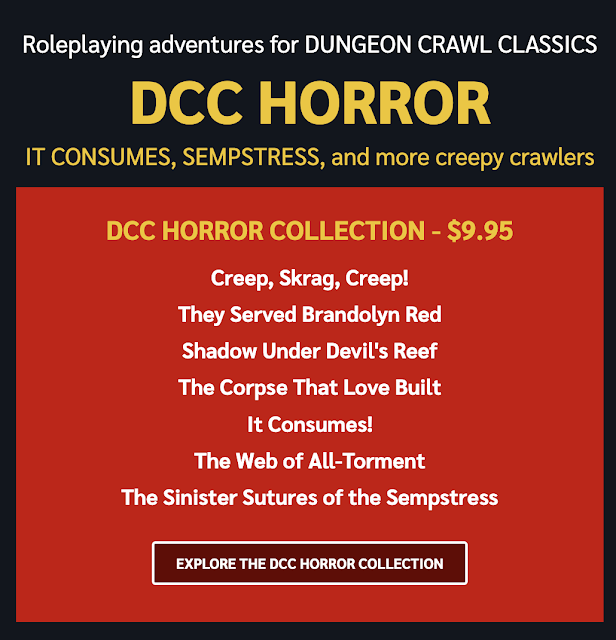 While I find the DCC RPG interesting, and very playable at conventions, I have consistently found the value of the various DCC RPG adventures to have value beyond the DCC game. I've been converting DCC adventures to Swords & Wizardry on the fly for years.

DCC Horror is a current bundle at Bundle of Holding. You get 7 DCC RPG Horror Adventures published by Goodman Games for 9.95. That is what I call    "a bargain" ;)

Adventurer! This DCC Horror Bundle presents spoooky .PDF ebooks for Dungeon Crawl Classics, the Goodman Games tabletop fantasy roleplaying game. Though many DCC modules present sword-and-sorcery scenarios of gold and glory, in 2015 Goodman branched out (oozed out?) to produce annual horror scenarios – often tied to Halloween – that throw standard DCC fantasy characters into nightmarish pocket dimensions, Cthulhoid laboratories, Frankensteinian towers, abomination-haunted coffin ships, and cursed wedding receptions. Slip any of these digital adventures (for character levels 0 through 6) into your regular campaign as a trick, and with the right attitude everyone will eat them up like a treat.

Note: These modules require the Dungeon Crawl Classics RPG Core Rulebook, which is not included in this offer.

Dungeon Crawl Classics Horror module The Web of All-TormentFor just US$9.95 you get all seven titles in our DCC Horror Collection (retail value $42) as DRM-free ebooks, including the zero-level "funnel" campaign kickoffs Creep, Skrag, Creep! and They Served Brandolyn Red, the low-level adventures Shadow Under Devil's Reef, The Corpse That Love Built, It Consumes!, and The Web of All-Torment, and the level-6 module The Sinister Sutures of the Sempstress.