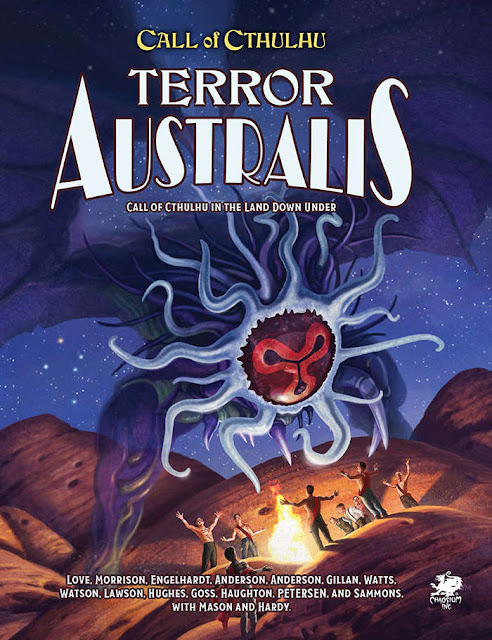 Aussies and Call of Cthulhu would seem to be like peanut butter and chocolate. Not necessarily something you would think of on your own, but put together it becomes an amazing combination.

Well, maybe not quite like that, but I could see my current gaming group rolling up a Crocodile Dundee-styled character for Terror Australis. I'm not sure if that is good or bad though.

Halloween is just over a month away, and until tomorrow morning Terror Australis 2e for CoC is available in PDF for 8.36 - half off of its regular price of 16.71. "Put another Mi-go on the barbie!"

Here we focus on the history of Aboriginal Australians and Torres Strait Islanders, as well as the white population, and contrast life in the urban and life in the rural environments. Special focus is given to Australian investigators, with new skills and occupations appropriate to for Aboriginal and white Australians. We round things out with brief biographies of some key Australians of the post-Great War period, who might be encountered by wandering investigators.

This chapter provides a toolkit of historical subjects, usable by Keepers, for running games in Australia. Topics include law enforcement, transport, mounting expeditions into the Outback, communications, and sources for research.

Provides an in depth look at some of Australia’s key cities, including Sydney, Melbourne, Perth, Adelaide, and Brisbane. Maps are provide for each city, as well as details on notable mysteries or events, and suggestions concerning cults in thrall to the gods and horrors of the Cthulhu Mythos.

Known to some as “the Dreaming” or “Dreamtime,” the Alcheringa chapter focuses on how to incorporate the wisdom and learning stemming from Aboriginal cultural traditions into games, and features special rules and mechanics for running “dream quests” to gather important information to solve dire situations facing the investigators, as well as the rewards for “solving” a “Song-Line.” The stages of a Song-Line are discussed and presented with examples, such as the Story of Bigibila, which can be played as a scenario introduction to Alcheringa. Topics such as Aboriginal sorcery and artifacts are also discussed.

The Mythos in Australia

Here, the book looks at the dark conspiracies and taint of the Cthulhu Mythos upon the Australian soil, with particular reference to the legacy of the Great Race, the Flying Polyps, and to the elusive and mysteries Sand Dwellers. A range of Mythos cults are presented, ready for the Keeper to incorporate into games, as well as featuring some of the other Mythos monsters that could be found lurking in dark shadows.

The book is rounded out with two large scenarios and appendices.

Long Way From Home: the investigators look into a series of odd and unexplained meteor showers and are drawn into a web of intrigue involving some ancient foes. Presented as a sandbox with multiple entry points, the scenario features a range of plots and encounters set in the remote region of Paralana.

Black Water, White Death: sought-after papers concerning Australia’s convict history lead the investigators to Tasmania and to a dark mystery to terrify the dreams of all concerned. What begins as a simple matter of attending an auction ends with terror and a cosmic threat.

Gathered in the appendices are some of Australia’s deadly wildlife, with game profiles provided for their use in games, as well as timelines covering Australia, and recommended further reading and viewing.

In Australia, investigators will come face-to-face with supernatural forces that have endured for longer than humanity has existed. It is a land of adventure, danger, and ageless wisdom—a perfect for setting for Call of Cthulhu!

Email ThisBlogThis!Share to TwitterShare to FacebookShare to Pinterest
Labels: call of cthulhu, deal of the day