What Happens to Your Gaming Stuff? 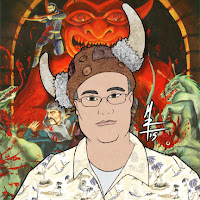 This week I've seen a few interesting posts on Facebook, and elsewhere, not just the notice that we've lost Steve Perrin.

Now I don't know Steve and I'm not sure if I've played anything he's written, but that is beside the point for me today. I do have friends that knew him and are feeling this loss on a personal level.

The news of Steve's passing, and again...some of the other posts I've seen here & there made me think a little bit about my own mortality and the simple fact that a lot of us grognards are aging. Estate panning is a thing and not really my focus here today, but it kind of is.

I'm sure some of you are lucky in the fact that you are part of a gaming family....as in your family actually games, maybe even together. In the other sense we're all part of a larger gaming family, but that's not what I mean.

Now my family...I don't think they get my gaming "thing" at all. I'm 95% certain that despite my repeated attempts to show, explain, and even demonstrate table-top RPGs, they think I sit in front of a TV playing Xbox. I mean, I do that, but in addition to, not instead of RPGs (unless I'm in the middle of a dry die-rolling spell).

Like many of us, I have a decent amount of RPG "stuff" and there are a few gems in my collection...and I bet you do too. For example, I saw a Facebook post this week of some guy who got a cheap core book at Half Priced Books and it ended up having Gary Gygax's signature from like GenCon X or something. All I could think about was how upset I'd be (in the rhetorical sense, clearly) if, after my death, my folks just took all my RPG "stuff" and just dumped it. Sorry, but getting $5 for a signed PHB at Half Priced Books is "dumping it" IMNSHO.

Honestly, I'd rather see my RPG collection, which is far more than just books, go to my gaming friends, or have it all sold at auction (with the proceeds donated), but really...in order for it to be, for lack of a better word, appreciated, I have to go through the effort to document my collection so my family might have a clue that white box is "special" or that those d20's in a little baggie are not loose with the rest of my dice for a reason. Yes, this piece of art is just a cheap print, but this other one is an Artist Proof, or this one is a valuable limited edition. Those old books.....they're just old-assed books. If my brother's grandkids want to pick up AD&D, by all means let them play with those books....and if they get into it, maybe don't auction off that other stuff.....

I'm currently fortunate that I have a gaming buddy who has agreed to be the Executor of my estate should something happen, but then again I do need to update my will to make that all legal and shit.

Just tossing this idea out there....I know it's a bit on the downer side, but knowing that things will be taken care of after we're gone makes collecting certain RPG "gems" a little more worthwile.

Posted by Christopher Stogdill at 12:40 PM

Email ThisBlogThis!Share to TwitterShare to FacebookShare to Pinterest
Labels: collecting, not Erik