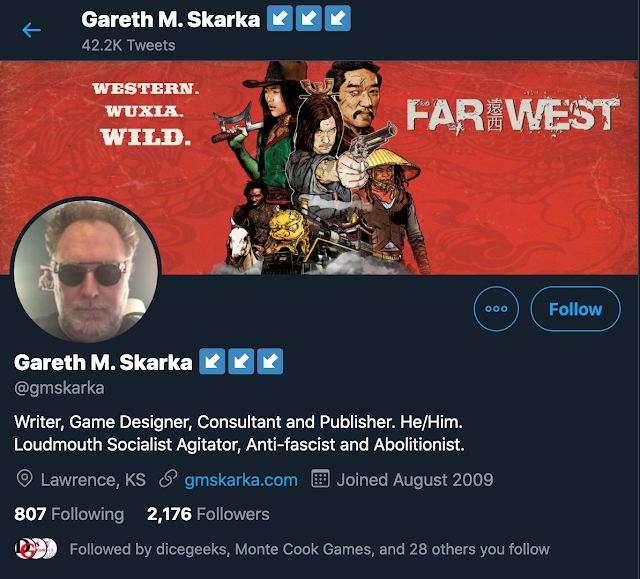 On July, 15th, Gareth Skarka made the following update on the Far West Kickstarter (funded way back in 2011 - note, my commentary will be in ORANGE)

For those of you that haven't seen this already via social media, the following update appears on my personal blog and the FAR WEST website (not Twitter? I'm surprised):

I've been quiet recently, I know. (but not on Twitter. NEVER quiet on Twitter. If only Far West could be written 256 characters at a time)

First things first:  Far West is NOT dead (please, bring out your dead). I only have one chapter remaining to assemble from the earlier drafts (and I have this bridge in Brooklyn to sell really cheap).  Things are moving slowly, and I figure that I owed you an explanation. (I think we are owed a new explanation)

It's no secret that among the many trials and tribulations that have plagued this project, my depression and anxiety have been at the forefront.  I have been my own worst enemy. (strangly enough, it hasn't stopped Gareth from working on other projects, which we'll detail below)

Well, a few months ago, my family convinced me to finally seek treatment.

So I've done that.

The initial stages of the process, where, among other things, we were trying to zero in on the right combination of prescriptions and correct dosages, made it very difficult to get anything done.  I just couldn't focus on anything other than my mental health.

Now that we are further along, and I've begun to feel the effects, I'm coming back into myself, in a way.  And that includes finishing Far West. (so close, yet so far...)

So that's what I'm going to do.

I appreciate the patience of so many people who have given far more than I could have ever asked. "Thank you" seems terribly inadequate, given the circumstances. (i think the last year you've given so many people a big FUCK YOU)

As a final administrative note:  All official updates will now appear on the Far West website (last update was THIS very update).  We have a forum there where I can be reached for questions. (last forum comment, not from Gareth was January 2 - Gareth's last was in 2015 - did i mention the forum hasnt taken new sign-ups in years?) The Kickstarter page will be used purely for delivery of texts, PDFs, etc. to backers. (so obviously the KS page hasn't been used)

Now, the home stretch.  Talk to you soon. (but only on Twitter)

So, what else has Gareth written during the time frame he HASN'T completed Far West?


Kind words said by those that weren't Far West backers:“[A] standout example […] of one of our newest professions: the e-book publisher.”

“…a visionary in the electronic publishing field.”–Dominic McDowall-Thomas, Cubicle 7 Entertainment.

“A trail-blazer… an innovator… one of the inventors of ‘how it’s done’ in the ePublishing sector.”
–Sean Patrick Fannon, OneBookShelf, Inc.

“Gareth got the Inner Circle off of the ground and I couldn’t recommend a better person to take start-ups under his wing.”
–Jeffrey J. Visgaitis, The Inner Circle.

“A lot of publishers would benefit from [his] experience.”
–Steve Creech, DragonWing Games/Bastion Press.