Speaking Dwarven at the Table......WITHOUT a Scottish Accent 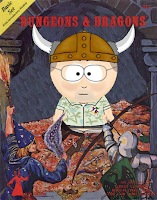 One of the things I do regularly, but probably not often enough, is to go through my digital files and try to clean things up. These days with storage becoming cheaper it's too easy to simply ignore the inevitable bloat of directories and files.

So I'm looking at my directory of PC files....if I'm not using a digital PC sheet I'll often scan my physical sheets every level. Then I can use "old" PCs for NPCs or if a pick-up game comes along and the GM goes "the group needs a 3rd level Magic User...." I'm good.

Anyway I'm in this directory and I found a word document entitled "Dwarven Slang", which kind of cracked me up. As a player in a 5th Edition HackMaster game I had a Dwarven Fighter named Balen.....

5th Edition is crunchy AF, especially compared to the average OSR game, and Balen had a terrible grasp of the Common/Human languages. I can kind of relate because while I know tidbits of multiple Human languages, they get all jumbled up in my head and at best I can speak a phrase or two.

In-game I got this. One thing I did was assign a language to Balen.....I mean a real-world language. I thought that Icelandic was a good choice and since he had such a low ability in "Common" he wouldn't be able to speak the same language as the other PCs, but he'd understand a bit more....kind of like me with German or Spanish.

To this end I made a small custom Icelandic/English dictionary so at the table I could use Dwarven, er Icelandic to a little "point & talk" when dealing with the rest of my home group. Simple stuff, numbers, nouns mostly, but the crown jewel of my RPG linguistics were phrases (idioms) and swears.


I don't know how many of you have spent much time in another country dealing with another language, but I was fortunate enough to have served overseas in Germany and a few other countries. One thing that always fascinated me when it came to the language barriers were idioms and swears. A lot of things technically translate, but don't actually translate in practice. For example I briefly had a Dutch girlfriend and I said something about someone "taking the short bus to school". Most all Americans got right off the bat that I insinuated that someone was slow/stupid/not to bright. My gf, knew what a school-bus was, but a short school-bus? No clue. Later on that trip I heard her swear and I was straight-up shocked because the literal translation was what I'd argue is the strongest swear possible here in the US (and no, I'm not going to repeat it), but in Dutch was basically the equivalent of saying "shit".

I loved learning Dwarven/Icelandic swears.....my favorite was basically telling someone to "Fuck off" but I think the literal translation was "Go to the asshole!" I wish I remembered the actual phrase, but alas I could only find my Dwarven Slang list and not my dictionary or Dwarven Swear list.

The cool thing is when doing something like this......it doesn't matter so much if you get your pronunciation correct as long as you are consistent.

Posted by Christopher Stogdill at 1:00 AM