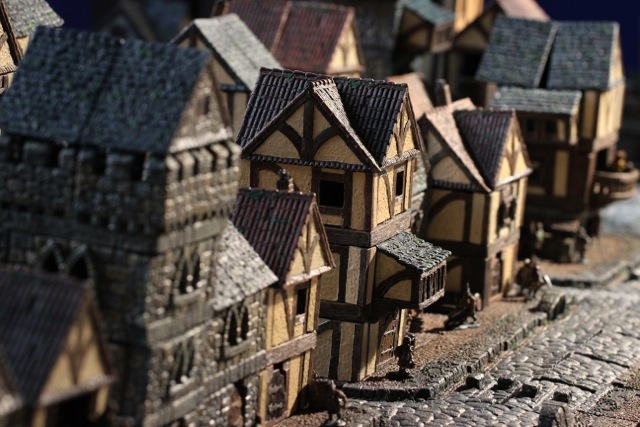 I'm a backer of the two previous Dwarven Forge Kickstarters. Still not 100% sure why I backed them, as 99% of my gaming is via Roll20 (and the rest is convention play.) I love both sets and I want to display them, but I don't know how much actual game use they will get.

So when I saw that Dwarven Forge had a Kickstarter for a City Builder System, I was interested, but more as someone that looks from afar. I played the video and was excited by what I saw, but I wasn't going to pull the trigger until my wife piped up from the next room: "That sounds really cool. Can I see the video?"

I have now been told that we NEED it. The painted version too. Lowest buy in that includes stretch goals. I don't recall Rach ever telling me that we needed anything regarding gaming material before, except maybe some Doug Kovak's prints at NTRPG Con last year.

So, in for the painted Hamlet level. Rach is already deciding where we are going to display it.

When things fall in place this well I'm afraid to ask many questions ;)
Posted by Tenkar at 5:17 PM