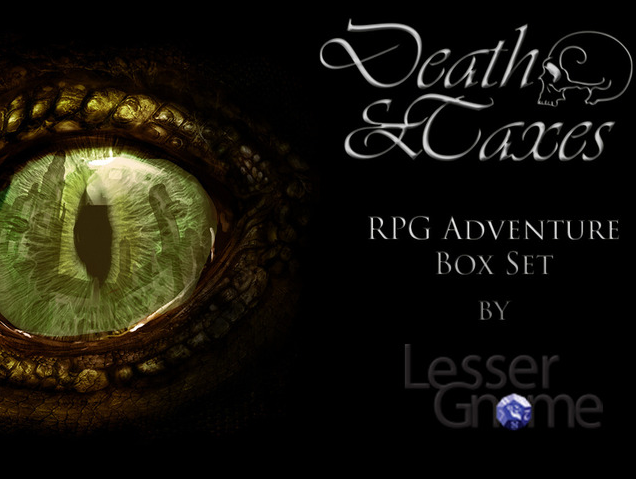 If you are one of those that got in on Whisper & Venom, you know what to expect from +Zach Glazar and Lesser Gnome - nothing less than an amazing Kickstarter filled to the brim with goodies, amazing production values and dare I say it? On time.

Those that missed out on Whisper & Venom, Death & Taxes is the latest boxed set adventure / setting, complete with miniatures and a whole lotta goodies as stretch goals are hit. Yes, in a box.

You want all of the goodies, for Old School, Pathfinder or perhaps even 5e? Stare Death & Taxes in the face and back this Kickstarter!

Death & Taxes is Lesser Gnome's follow-up box set to Whisper & Venom. It was nominated for an ENnie, for those of you who are into that sort of thing. Twice!*

Death & Taxes is an adventure for 4-7 players using characters level 4-6. Although designed for classic rules, the ultimate goal is to create total conversions of the game for popular modern systems. Once the goals for project funding and the backer surpass the initial stretch goal targets all options are on the table, As backers, you will have a seat at that table to decide which one will happen first! Look for the results to be revealed in our Stretch Goals section as the campaign progresses. The Gnomes are ready start to translating Death & Taxes into Pathfinder/OGL and (we hope) fifth edition compatible versions.


South of the Whisper Vale lies a land of gentle slopes with forests and greenswards. Small townships have sprouted alongside decayed municipalities. The area’s sparse populations are independent and self-reliant. Sporadic trade and a dim memory of avaricious rulers connect them.

On a gentle hillside sits an imposing stronghold known as The Auctor. It has remained empty and eerily pristine since the last noble family fled south. Its majestic rooms and corridors are shrouded in fear. Living memory recalls a time when the happy glow in its upper galleries was a thin façade to its real function.

An haute-coiffed tax collector arrives with his retinue of hairdressers, auditors of unusual size, a mason and a pack of gnolls. The collector carries important documents asserting his authority to tax the region. His orders are simple: Reclaim the Auctor and squeeze.
Mobs will form, tempers will flare, old scores will be settled and pounds of flesh will be exacted.

Welcome to the season of Death & Taxes.

Email ThisBlogThis!Share to TwitterShare to FacebookShare to Pinterest
Labels: death and taxes, kickstarter