Far West - So Close, yet So Far - Missing Deadlines Since December 2011 (Wayward Kickstarter)

Far West. Far from Done. These are the voyages of the RPG Far West. It's bold, daring mission. To miss more self imposed deadlines than any other Kickstarter. DaDaaaDaDaDaDaDaaaaaDa!

Lets see, what has happened in the gestation span of Far West:

- consistently missed deadlines dating back to December, 2011. Then November 2013. January 2014. Most recent missed deadlines to release the PDF: June 2014, July 2014, August 2014. I know I missed at least a half dozen in between. Always the release is just over the horizon.

- Cubicle 7 was brought in to distribute the print version in June of 2013. In mid October 2013 we were promised actual copies being printed. As of September 2, 2014, Cubicle 7 cut their losses. 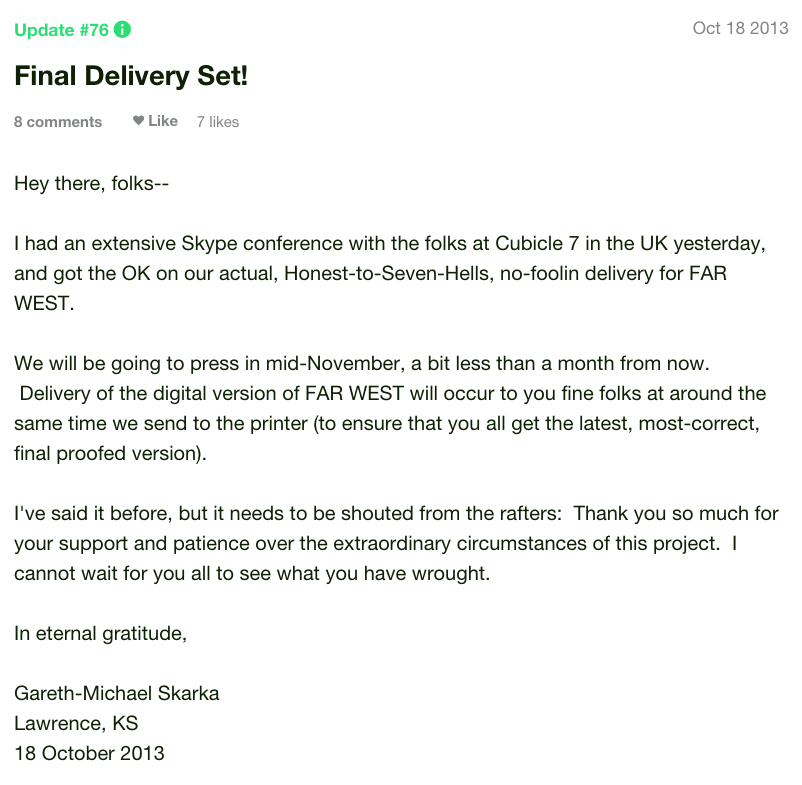 Now for the quote of quotes, the definition of a messed up Kickstarter:

At worst, I figure I am no more than a week to 10 days behind schedule. That must be that new math shit they teach in college these days. At worst, assuming the promised December 2011 delivery, I'm seeing 138 weeks behind schedule. At best, given the promises from last October, about 39 weeks.

It's comical. Hell, it could be made into a drinking game. At this point, I'd take nearly ANY game, as I've lost all hope that Far West will be any more coherent or complete upon any possible future publication. Because as Annie says, tomorrow is always a day away. Far West is coming tomorrow...