Looks Like There Will NOT be PDF Versions of the Core D&D 5e Books - But There's an App for That ;) 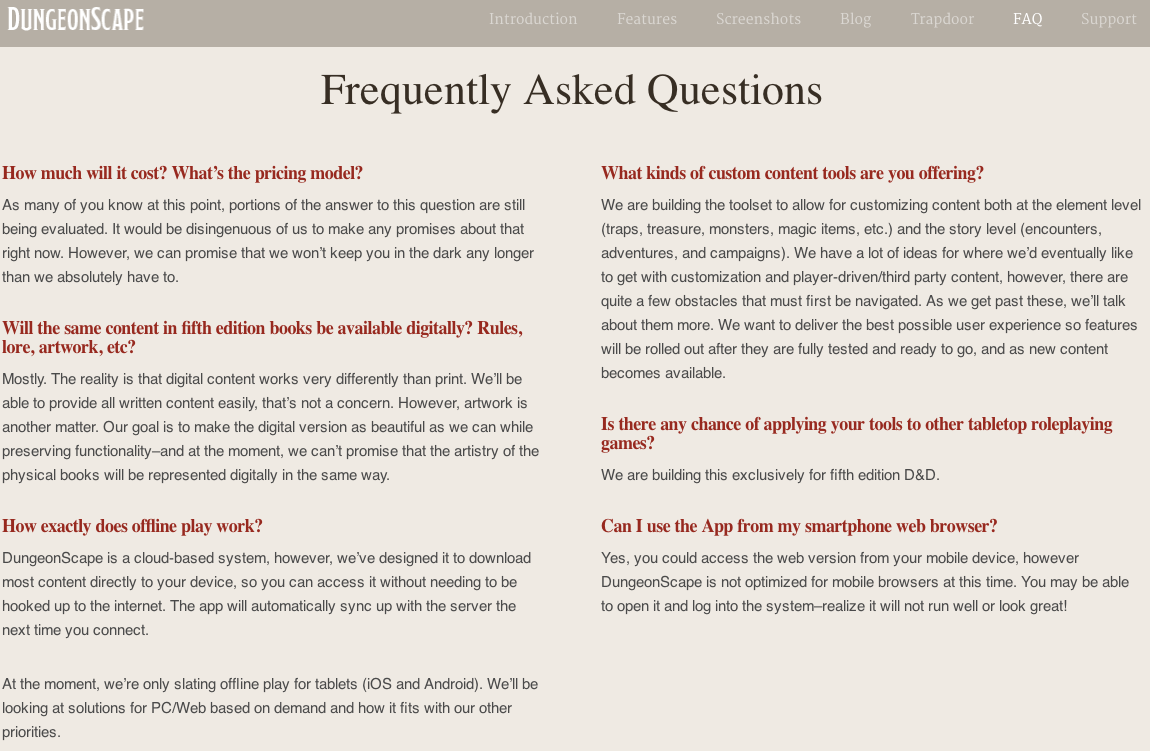 It doesn't look like there will be PDF (or epub or mobi) versions of the 5e core books. Part of the argument is that we've already been given the 5e Basic Rules for free in PDF, so why butcher sales of physical books even more. The other argument against it is piracy. Last argument? They've given digital rights to the 5e rules to the company behind the DungeonScape application from Trapdoor Technologies.

Alright, first a little background. ENWorld has an interview posted on their site with Mike Mearls that addresses just this topic (conducted by Mike Evans).


Mike... because we know that gamers love books… and we’re gamers too, we love books! And then it’s not just a game manual, it’s an artifact Because if you like D&D enough that you want to spend money, we’re are going to give you reasons to spend your money. But if you weren’t going to spend money and just pirate it, that’s easy, there’s already a free PDF out there.

I suppose I’m kind of editorialize this… there are plenty of people out there who can justify the economical necessity of piracy, and just as many who say here’s the solution to piracy and I’m going to sell it to you. I mean I look at it that when I was a kid and I pirated software, it’s because I only had 50 dollars a month I could spend on games, so all that would mean is I’d skip stuff, I’d never play Ultima V because I could never buy Ultima III. But instead, I played a pirated version of Ultima III, and then when Ultima V was announced my 50 bucks went right to Lord British. But really, if there was no piracy to play the earlier game, I wouldn’t have spent money on the later game when I had it. And I think it’s easy as a creator to say, oh this piracy it’s killing me! Instead, I see it, and I think you have to approach it because it’s a challenge, how can I make you say, you know what I want this [book]. I gotta have it. But there is still a market for the PDFs…

Yea I was going to ask about that [PDF sales]…
Mike: You know we haven’t announced anything official yet, but I’d be surprised if we released the PDF to be exactly as the book. Because I think that we’ll sit down and look at a PDF format of the book and say well what’s the best format that could take? It really does make good sense to have it sort of stripped down and in a utilitarian layout.

Because you know what? I’m actually just using this because I just want to get some rules at the table. Maybe I just want to be on a plane or just sitting around and want a quick reference that’s a quick read and just the information I want. So what does that do to the [PDF] design? We strip out a lot of the art and make it utilitarian. Or we break it up and actually the ebook version is actually three books, we’ve broken it up into three parts, and each topic is now a separate book. So maybe I’m playing a Wizard, and I’m just using the Basic D&D, but I want more spells… so I’m just wanting the spell chapters, so maybe I spend 5 bucks or 2 bucks just so I have that indexed or bookmarked and can quickly reference my spells. You know, what is the usefulness of that? Just as a bibliophile wants the whole book as a physical artifact, the digital only user, well, what is the best way for them to get access to the game.

So there is nothing concrete yet, but those are just some of the possibilities being discussed?

Mike: Yea exactly. Especially with the Dungeonscape Tool that Trapdoor [Technologies] is working on, and how they are going to approach things and what features they are going to have, could that kinda feed that need? Because we asked that it be iOS, Android, PC, so maybe you can just download the app and then buy the say Fighter packet and however we’re breaking it down, so are we really going to need to sell a separate PDF because actually the best way is to buy the tool, and the tool is also populating my database and I can make characters, then maybe I just don’t necessarily need the PDF. So a lot of it is just trying to figure out where things are with what they’re [Trapdoor Technologies] is doing, and we just don’t want to rush into something and then you’re like but I just bought the PDF and then the tools came out, and now I’m paying twice for the same content, that would make you upset. So it’s really just figuring out what is the best thing for the gaming audience at this point.

and here is part of today's blog update at the Trapdoor Technologies site:


Being the digital distribution licensed partner for Wizards of the Coast and the D&D TRPG, we had to consider a whole different set of challenges around who could access content, how they could get it, and what they were allowed to do with it.  Physical books simply don’t have the same problems as digital books (i.e. you can’t attach a physical book to an email and send it to a hundred people with a click of a button.)  However, we also had to recognize the foundation of tabletop roleplaying games: friends, sharing information, imagining epic drama, and of course, rolling a natural 20 (amirite?)...

Right now, the answer is that we simply can’t give people the ability to share full books with one another, because it would open DungeonScape up to a level of potential exploitation that we aren’t prepared to handle.  In digitally distributed content, given the capability, there’s no limit to who people can share with, or how the system could be abused. The limitations of paper just aren’t there.  In DungeonScape, taking advantage of the full suite of player-based tools (i.e. character creation and character sheet) requires the digital version of the PHB (Player’s Handbook) to be unlocked for each account/player.  To help soften the cost impact, as we’ve mentioned in other places, content will be broken out to support smaller incremental purchases.

However, once the PHB is unlocked, it is permanently yours under that DungeonScape account.  The supported tools will improve as we update them, and errata will be automatically included into the book when released.  Players will have access to all of that at no extra charge.  The PHB in DungeonScape is *the* core rulebook to the player experience, and will be for the next several years (until 6e), and it’s available for a one-time purchase (or set of purchases). Once it’s downloaded, it and the tools are yours forever.

When it comes to DM’s materials (i.e. DMG, MM, campaigns, adventures, supplements, etc.), this is where the sharing function will shine.  Great DM’s often use supplemental materials to support the story they are weaving.  This includes things like maps, descriptive text, illustrations, quotes, and personal notes.  These will all be able to be shared within the app, and players won’t need to buy these things to get the benefits of them.  In addition, the app will allow for sharing information that paper can’t easily provide; things like secretly giving that thief character a magic ring they pickpocketed, or sending messages in complete secret.

To be honest, if it were to work at they are discussing it, I'd prefer this over PDFs. Heck, I'd want to see something similar that was cross platform and open sourced, so I could one day run S&W or the DCC RPG with an app like this.