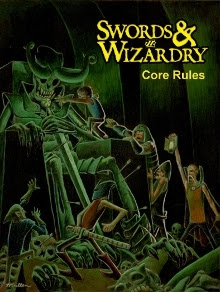 How did it go? Amazingly well.

I tossed the S&W Core rules at them and they were easy to follow by both. One asked to play an Elven Ranger, so I pulled out the S&W Complete rules, made an exception for the race and we were good to go. The other chose Human Cleric.

Basic houserules included allowing the Ranger to use the bonuses for High Strength (the party is going to be 4 max, so the firepower from the 17 Strength look to be needed). I also allowed the Cleric to get his bonus spell at 1st level.

I used the Tomb of Sigyfel and unlocked all but one of the doors, as there was no thief, and only the door leading to the ghoul made sense to have a padlock. I actually set the page up in Roll20 while we were in the Hangout and they were buying equipment, as I wasn't sure if we were actually going to run a session this morning and never got anything ready ahead of time - foolish me ;)

For players that hadn't played a TTRPG in 15 to 20 years they both fell into gear quickly. Room searching and looking for signs of traps we're standard procedures before they were halfway through the adventure. As I said, it went swimmingly well.

It does mean the system has been chosen (I had to make the call, and it was close between S&W and BFRPG, but I went with the gut call), S&W appears to be easy to grasp, and it certainly seems to be the case.

I also linked up the S&W Complete rules if they want to make the investment, but there is little on the player's side that needs that with the exception of the classes. They are excited for the next session, which is damn cool :)