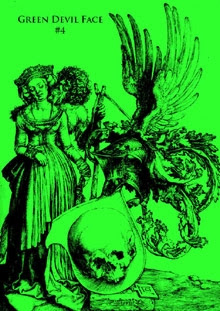 Lamenations of the Flame Princess has put out a new (issue?) of Green Devil Face.  GDF #4 is chuck full of OSR goodness.  70 pages for 5 bucks.

Yes, some of this has appeared elsewhere.  So what?  James has a unique touch when it comes to RPG products, and it shows here.

Alright, now for the word of James himself:

Green Devil Face is back!

The True Finnwegian Old School Role-Playing kult unearths the legendary zine from its 14-month slumber to deliver more madness to lay your players low! This isn't the solidly-composed, somberly delivered material that LotFP normally trades in, this is MADNESS UNLEASHED! Rapid-fire fuel-air explosive blasts of pure energy and creativity which will ignite your imagination because this one's just too hot! If you run an old-school game and you can't find something in here to put in your campaign RIGHT NOW you're just hopeless. You're not hopeless, are you? Then PROVE IT! Buy this PDF RIGHT NOW!


Contents of This Issue:

Powered by Qumana
Posted by Tenkar at 8:36 PM