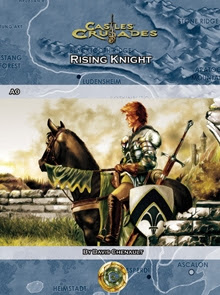 First things first.  I'm a big Castles & Crusades fan.  It brought me back to the Old School way of thinking.  Despite the typos and editing problems of the initial releases (okay, and later releases) I've found the system to be alot of fun, with an AD&D 1st edition feel without actually being AD&D.

Castles & Crusades A0: The Rising Knight is an introductory adventure for C&C.  It introduces the local setting that will be used further in the rest of the A series, which can be placed in either the default C&C world (Aihrde) or fairly easily into the setting of your own choosing.

I thought I recognized it, and I do: it is included in the C&C boxed collector's set, and it is also included in the Fantasy Grounds C&C Module, so an aspiring DM can get running pretty much from the start.  That being said, it is not a tutorial for a new DM.  Instead, it is a good starter adventure for a new C&C campaign.

As with most of the Old School products out there, it is usuable without to much effort with any of the OSR rules out there.

This is an introductory adventure for those playing Castles & Crusades. The module has been designed to allow for the players and Castle Keeper alike to begin using the Castle & Crusades rules in a fairly non-demanding game setting. The goal is to familiarize the Castle Keeper and players with the basic rules and their applications while undertaking an exciting adventure.

The adventure is also designed for modularity and expansion. Many of the encounters, monsters, settings and non-player characters can be removed from the context of this adventure and placed within those of your own making. We here at Troll Lord Games encourage all gamers to do so as this is the quickest route to ever more fulfilling game-play. As with the Castles & Crusades rules, this module is a tool to use as you will. Please do so.

Further, should the players or Castle Keeper care to continue with the adventure and follow its thematic development, the follow-on module, Assault on Blacktooth Ridge and The Slag Heap is now available. Several references and avenues for continuing the adventure are mentioned within the text, but the Castle Keeper must devise the most meaningful manner in which to carry this out.
√

Powered by Qumana
Posted by Tenkar at 8:05 PM

Email ThisBlogThis!Share to TwitterShare to FacebookShare to Pinterest
Labels: Castles and Crusades, Reviews