Trollzine #3 - For the Other OSR Game

Tunnels & Trolls is the other Old School game.  Actually T&T, Runequest, Traveller and D&D mark the four corners of classic role playing in my opinion. That could probably rate a post unto itself, but I digress.

Trollzine, for those who miss the obvious, is a magazine for Tunnels & Trolls. 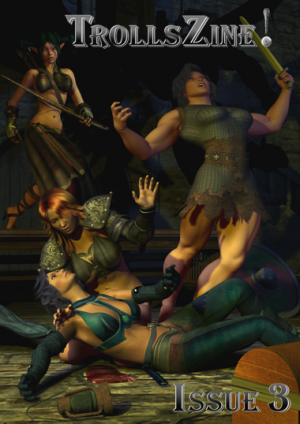 ﻿TrollsZine 3 is the adventure issue. It contains two ready to run adventures for the busy games master, as well as two new solo adventures. Four Jars of Mead is a previously unpublished solo by Ken St. Andre, beautifully illustrated by Jeff Freels. The Temple of Issoth is a new solo adventure by the prolific Dan Hembree. Also included are adventure locations, magic items, new spells, several new monsters, the continued adventures of Aeulung and rules for character inheritance. Contributors include Ken St. Andre, Justin T. Williams, Randy Whitley, Tori Bergquist, W. Scott Grant, Dan Hembree and Mike Tremaine. It is packed with great drawings by Jeff Freels, David Ullery, Kevin Bracey and Grantt Ennis, amongst others. Edited by Dan Prentice and Kevin Bracey, TrollsZine 3 continues in the grand tradition of writing by gamers, for gamers and is still available for the bargain price of $0.00.

Not bad for free, huh?  Tunnels & Trolls was my system of choice for solo play.  I never quite liked it for group play, but admittedly only played in about 2 or 3 sessions, so take my opinion with a grain of salt.

Trollzine 3 is 80 plus pages of Old School gaming.  It may not be the Old School you know, but it can definitely stand on its own.