True20 is Green Ronin's OGL derived generic ruleset and it is based and the Mutant and Masterminds ruleset (okay, that sounds awkward even to me).  It seems to me it has a bit more popular a few years ago, and that Savage Worlds appears to have settled in as the major "generic" rpg ruleset these days. 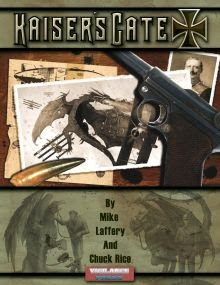 Kaiser's Gate is a mash up of standard fantasy fare and the events leading up to, including, and directly after World War 1.  It's a sandboxie setting for the most part, highlighting the major events,countries, npcs and the like.  Adventure seeds abound within it's pages, and the setting pretty much comes to life as you read it.  Then again, I was a history major in college, so mixing WW1 history and D&D fantasy into one setting is weirdly appealing to me.

I'm 3 or 4 years removed from playing in a message board True20 game, which should have put me at a disadvantage, but the first half of the book is more setting and fluff then anything.  Heck, even the crunch of the later half, creatures and npcs, items and vehicles, etc, could probably be shoehorned into one's favorite generic ruleset without too much trouble.

My main complaint?  Lack of PDF bookmarking.  I've gotten spoiled by it, I know, but I don't see why it couldn't have been included.

Here's the blurb for Kaiser's Gate:

﻿This alternate history, genre-blending setting for the True20 game system presents a fantastic take on World War One - combining the gritty battlefields of the Great War with elements of magical fantasy and horror.

* Sorcerers of the German Imperial Army - fueled by the magic of red dragons - bulldoze Allied defenses and push deep into France.

* In the darkest days of the war, in desperation, the Kaiser makes a Faustian bargain that unleashes an invasion of legions of creatures from Faerie onto the European continent.

Kaiser's gate also includes a new map-less vehicle combat system for True20 and a sample adventure to get the action started immediately.