Getting my Gaming Fix In by Any Means Possible

It's week four, or is it five(?), that I've been going sans dice as I'm overseas and my group is not playing during the lead-up to NTRPG. To say I've been jonesing for a game is a bit of an understatement. Luckily I did download Baldur's Gate off of steam and I'm on day 66 of my adventures along the Sword Coast. This go around....I've started the game maybe a half-dozen times but have only made it to Baldur's Gate once and never had finished the game.....this go around I just started off with an entirely custom party:

I am totally cheesing this playthrough though in making sure every level-up has the PC's getting maximum HP. I'm doing my best to hoard every GP I can, even if that means selling off all of the potions, which I assume might bite me in the butt later...we'll see.

Even though it's a fun enough time-waster, it doesn't quite scratch that itch....

....so I'm starting to write/design a new adventure.

After getting to explore a bit of the local area I've come up with a mish-mash of ideas that I think could work well together for a written adventure. Right now I just have the shell of an idea....but it is written down, and I need to figure out the framework with which I'd like to work in. 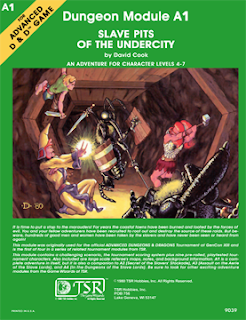 Right off the bat I'm thinking I'd like this adventure to be a bit of a multi-purpose kind of thing, so I'm thinking I'll use something that already exists as a rough template. A1 Slave Pits of the Undercity works for me as said template because what I'm thinking of is a larger adventure that can be used, at least in part, as a tournament adventure.

Since most of my more formal adventure writing is for tournaments, I've got that experience I can draw from. Of course, the adventure portion will literally just be part of the overall adventure.

Now my initial planning is to write this for Old School Essentials (OSE) as I think that'll be easy enough for GMs to flip over to any other flavor of OSR. Also I'm thinking levels 3-5, but I want to keep that a bit loose until I figure out the tournament portion of the adventure. 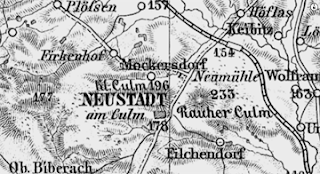 Since my initial inspiration came from a couple of local (well, currently local) places, I need/want to do what I can to import some historical maps from the area. Luckily I was able to find a German map website that had access to some old maps of the area. It's enough to start off with, but it's really misleading on just how the location itself looks. I'm hoping that with more time looking I can find a topographical map I can overlay on a homemade version of this old 1800-something map to strike a nice balance that shows just how much this one feature can be seen from even the far side of this rather large valley. 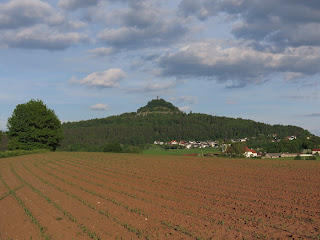 So the first phase of this project will be working on the larger overland map, tightening up the background story, and then writing the tournament portion of the adventure, along with any specific tournament requirements (special rules, pregens, etc.) Then I can work on "interior" maps, any special monsters, and overall tweaks.

Then the real PITA work comes in: editing and playtesting.......luckily I have a few folks I can probably reach out to for assistance on that one.

Posted by Christopher Stogdill at 10:57 AM