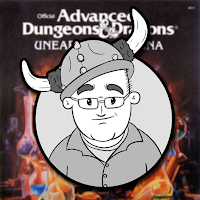 This weekend was Doug Rhea's Memorial Gathering at the Frog God Games Warehouse in Dallas.

Now I won't pretend to have known Doug very well, or be lucky enough to consider him a friend, but I did get to spend time with him just bullshitting at his North Texas RPG Con, and he came across as a stand-up guy.

I went to this gathering mostly because Doug was more of a "friend of a friend" and I wanted to be there in support.....because I could. 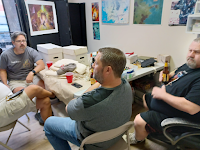 The weekend was rather interesting on a couple of levels. It was not
somber although it was mostly sober. People didn't just sit around telling stories about Doug, although there were a lot of stories of the man told, mind you. No games were played, no dice rolled, but it was definitely a weekend of gamer fellowship. Lots of people catching up with each other, talking about their lives, their games, and about NTRPG. Stories about Doug were woven in here & there and honestly I was kind of surprised. 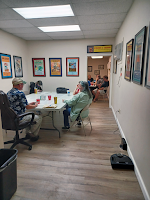 Now I'm not trying to bring the focus around to me, but with the guys I normally hang out with a significant percentage of the stories would most definitely be NSFW. I would expect a similar event being held for those I interact with on a daily basis (old military brothers) would be far less sober, more games, and stories about events that would get people fired or thrown in jail these days! 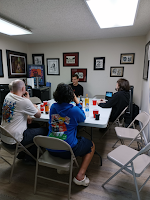 But with this event and Doug, the stories told about him could've been written by a modern PR firm. The underlying theme of each and every story was how kind, generous, and thoughtful he was. Compared to wo many in our industry
the man was practically a saint! Thing is, I didn't sense even an ounce of bullshit in any tale told about Doug. These weren't tall tales or some sort of idolization about the man who brought North Texas RPG Con into the world.....no these were stories about a guy who loved sharing his passions and a man who was rather compassionate and giving of himself. 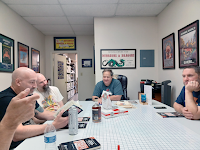 By the time I walked away from the warehouse Saturday afternoon I fully realized that I missed a few opportunities to get to know Doug better, but I am glad that I did get to play in one of his games. I also realize that I need to be a little more grateful for the gaming I do get to partake in and I should be a bit more mindful of appreciating those I get to sit with in this hobby, at and away from the table.

There's a tradition from my time with KenzerCo to remember a gamer with a specific poem. Since that's a different group of folks I figure those here may not be familiar with the poem of The Empty Chair, by Jolly Blackburn.

Eulogy for a Gamer

There is an empty chair,

at the table this day.

A hallowed place where,

a friend once played.

The roll of his dice,

my ears long to hear.

Or perhaps it would suffice,

if he should suddenly appear.

With character sheet in hand,

All his friends would stand,

as he sat in the empty chair.

I hear his voice a-callin’,

and it ties my heart in a knot.

For he cries, “Though a comrade has fallen,

You must play for those who cannot.”

We conquered worlds on the run,

he and I in the name of fun.

And as others may come and go,

I make both both friend and foe.

But what I long for most,

is our past now long a ghost.

Posted by Christopher Stogdill at 7:05 PM