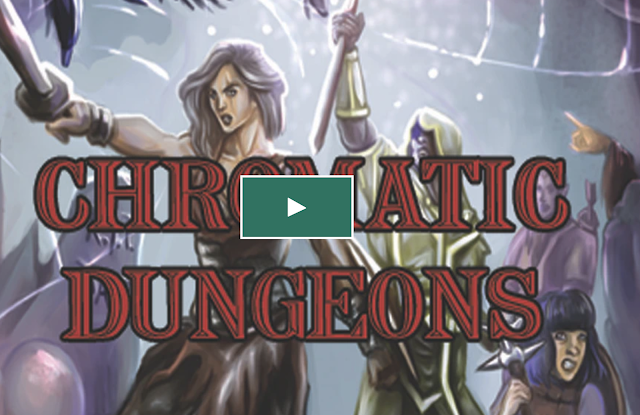 Capturing the feel of playing TSR era RPGs with modern lessons learned. Making the OSR welcome to ALL gamers of every demographic.

Do we need another OSR ruleset? What about a ruleset that isn't the direct clone of an actual edition, but a more general clone?

Why create yet another OSR clone when others already exist?

Simply put, I am trying to capture the feel of gaming in the 70s/80s without necessarily copying the mechanics of that era, whereas most clones are almost near copies of both presentation and rules. Some rules are important to capture the feel, sure, but only when necessary. We have decades of lessons learned since then, and the FEEL of the game is more important than any sacred cow.  See some of the mechanical changes below.

Interesting, but what does that actually mean?

What's Different From the Older Versions?

Alignment. Humanoids no longer have a default alignment in the Bestiary. This will vary by individual monster culture and region. You as the GM decide if all orcs are chaotic (evil), or if some might be neutral or even lawful based upon the cosmic forces influencing them.

Alignment part II. There are only three alignments, similar to B/X: lawful, neutral, and chaotic. Rather than being driven by a sense of individual morals, alignment is influenced by cosmic forces of law, neutrality, and chaos.

Ability scores. Limits or modifiers based on gender or ancestry are removed.

Ability checks. Most skill resolution scenarios will be based on a simple ability check. It’s how many of us were doing it anyway, and does replace the traditional thief percentile based skills that appeared in the game back then.

Armor Class will be ascending, rather than descending or using attack tables.

Race. This term is going away and being replaced by Ancestry. The original term was used (and is still being used) because the game was based on the early fantasy works of authors like J.R.R. Tolkien where humanoid creatures like orcs and elves were referred to as “races”. Since then, and over the past few decades, the term “race” isn’t really the best descriptor to use, and often carries loaded connotations.

Heritages.  Many of the traits that were previously tied to race are now part of a heritage, as well as many more new traits.  When you create your character, you choose two heritages and get those traits for your character.  That keeps things simple, and yet adds a level of customization to keep every character unique.

Class categories. Rather than each “class” as unique like it is in 1e, 3e, 4e, and 5e, they will be in groups similar to how 2e classified them. For example, fighters, berserkers, paladins, and rangers would all be classes under the Warrior group.

Class features. Some class features/abilities have been added or rearranged to avoid what is called “dead levels”. A dead level is any level advancement where the PC doesn’t gain anything other than additional hit points. Dead levels are widely regarded as not a good thing.

KEEP IT SIMPLE. For those familiar with 1e or 2e, you know that there were a lot of rules for a lot of different scenarios, from time keeping to aerial flight maneuverability (and we ignored many of them). This game will be more streamlined and simplified, putting those scenarios into the hands of the GM to make an adjudication rather than dedicate hundreds of pages towards rules. The goal is to keep the game moving without needing to look up many different rules, and to give you a strong outline and guidance on how to handle these situations, rather than list them out individually for you.

Compatibility. You should be able to take those old modules from the 70s/80s and easily use them with only very minor adjustments (mostly moving from descending AC to ascending).

Introduces a crafting system.  It's simple and easy to use, and adds a new element to traditional treasure (finding rare and exotic items).  Besides, what warrior doesn't want to wear a suit of red dragon armor from the beast they just slayed? ;)

Interesting, but how much Chromatic Dungeons? Well, 10 bucks for the PDF. 30 bucks PLUS the cost of the PSD and shipping for the print. I'm not sure if that is SC or HC, as the reward description isn't clear.

The book is written, so there is that going for it.

I'll need to think about this one. It's interesting but hard to recommend.

You can catch the daily Tavern Chat podcast on Anchor, YouTube,

or wherever you listen to your podcast collection. - Tenkar