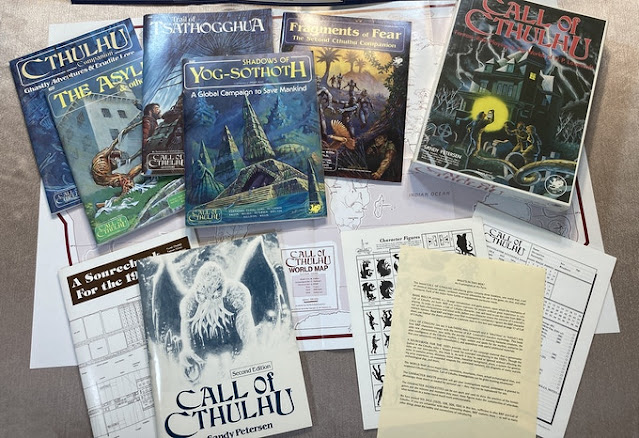 After nearly ceasing to exist from the horror that was the Call of Cthulhu 7th edition Kickstarter, Chaosium has made one hell of a comeback. Part of that comeback has been rereleasing its more classic titles in their classic editions - RuneQuest was one such title.

Call of Cthulhu is next on the list, and the offering is right here if you want your old-school gaming notes stroked. This is a reprint of the boxed edition of Call of Chtulhu that I picked up in the 80s, and for the longest time, it was the only edition of CoC that I owned.

The reprints are ready to go, and the PDFs will be distributed mere weeks after the close of the Kickstarter.

For Call of Cthulhu Classic Kickstarter in print (plus PDF), it's 40 bucks for the basic box, and 99 bucks if you want the deeper box with the 5 classic supplements. My originals are all beat to shit, so I'm in for a $99 box.

CALL OF CTHULHU RULEBOOK (we say it kuh-THOOL-hoo; Lovecraft said it “klhul-hloo” or “tluhluh”) tells how your investigators interact with the horrors of the Cthulhu Mythos. It is expressly written for people without great experience in role-playing. This book explains all of the Investigator characteristics, including Sanity, the consequences and SAN losses required when meeting fearsome creatures, the alien intelligences of the Cthulhu Mythos, a magic system and spells for the Mythos, scenarios so that you can begin immediately, and appendices with useful additional materials.

A SOURCEBOOK FOR THE 1920s (36 pages) provides much of the campaign material that a gamemaster (called in the Cthulhu rules a ‘Keeper’) needs for extended role-playing in the 1920s. Though the rules are not time-specific, this book is. It contains prices, distances, travel times, historical background, plans, a system for generating prior experience, an expanded weapons list, additional monsters, archaeological digs site plans, and more.

CHARACTER SHEETS will get your investigators started.

CHARACTER SILHOUETTES that can be cut apart and used to show the position of the Investigators and the minions and monsters they meet; these figures can make everyone's actions much more understandable.

The 2" Boxed set with 5 supplements

SHADOWS OF YOG SOTHOTH (80 pages), a global campaign to save mankind. The first of its kind.

THE ASYLUM & OTHER TALES (72 pages), seven shorter sinister scenarios set around the world and at sea.

TRAIL OF THE TSATHOGGHUA (64 pages), a mini campaign of two scenarios, plus a third adventure. It's world spanning, and thus all over the place.

FRAGMENTS OF FEAR (72 pages), additional gods, background, and other material, as well as a bonus scenario.

Due to the remastered formatting (remaining very true to the original look), we have room to add additional bonus content by the early authors from various other sources. These supplements often contain more than the originals!

Email ThisBlogThis!Share to TwitterShare to FacebookShare to Pinterest
Labels: call of cthulhu, kickstarter