Sneak Peek - The Crypt of the Skull Walker 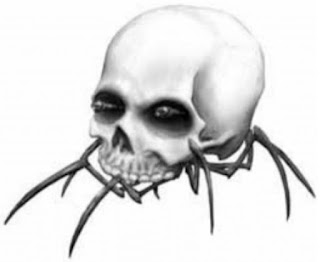 Work continues on the first issue of the Torchlight Zine. While the layout is ongoing I'm writing up a short adventure for the zine. Here's a sneak peek at The Crypt of the Skull Walker:

Crypt of the Skull Walker

A group of goblins discovered a crypt in the Grey Hills a few weeks back. Protection from the elements and a freshwater source (room 8) as well as incidentals to loot (and a place to store loot) have encouraged them to set up residence. Three nights ago, one of the goblins on sentry duty (room 1) was found, its corpse a dry husk. Sentries were doubled. Last night another sentry was killed, but this time there was a witness - a surviving goblin. He ran to his chief, screaming and ranting about the “skull that walks!” Now, the remaining goblins are hunkering down and establishing defensive positions. Nerves are on edge. Such is the situation your small party of adventurers stumbles into...

1 - There are the remains of a small bonfire in the south-east corner of this room. The embers are still warm. The single door to the north is ajar. The double doors to the south are closed (and barred from the room 4 side). There is the dried husk of a goblin corpse just north of the west entryway. A short sword, short box with 8 arrows and a pouch with 7 silvers are on the body.

2 - Old storage room. In the north-east corner of the room is a crate holding old mining tools. Also in this room is some odds and ends the goblins have looted from various travelers and caravans. Hidden underneath a blanket on the ground in front of the north wall is a silver dagger with a pommel encrusted with crude red gems. Value 100 gp. The rest the loot, if sorted, would be worth about 75 gp and weighs about 30 pounds. There is a secret door on the west wall, which can be opened by placing a torch into the single wall sconce of the west wall.

3 - True Crypt. This is the real burial chamber of a chaotic priest named Nabulis. He prayed for eternal life and his spider god granted it. Well, a form of eternal life. His soul gives energy that powers the Skull Walker - Nabulis’ Skull with the legs of a spider. The goblins woke the Skull Walker with their presence, and it hungers. If the party finds this room and haven’t yet encountered the Skull Walker, it is here.

Skull Walker art courtesy of Frog God Games. It will be a new creature written for Torchlight. 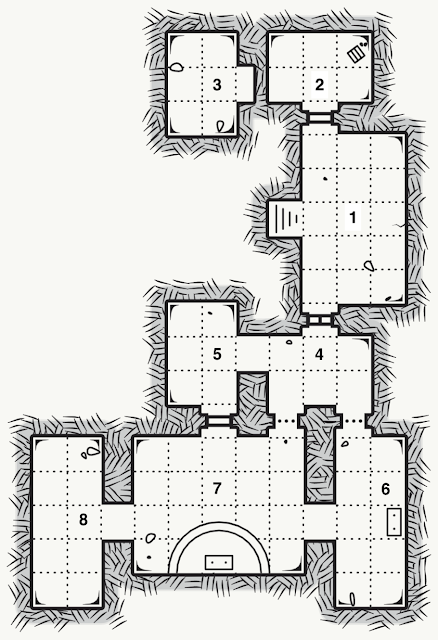 Email ThisBlogThis!Share to TwitterShare to FacebookShare to Pinterest
Labels: torchlight