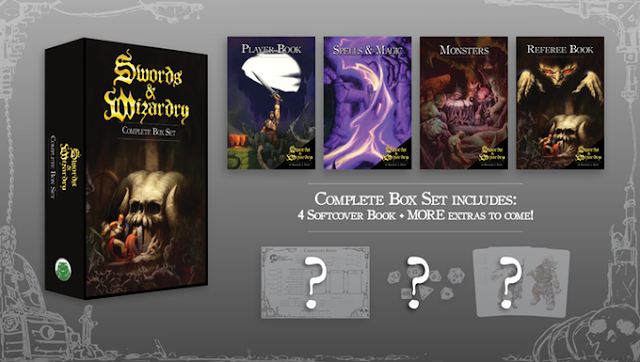 The Swords and Wizardry: Limited and Collectors Edition Box Sets Kickstarter hit its $12k goal in 25 minutes. 8 hours later, it has surpassed $36k. You want proof of the viability of the OSR? You are looking at it.

I'm as excited as all hell. I LOVE Swords & Wizardry and this simply shows how much love everyone else has for it too :)

I interviewed Pexx from Frog God Games earlier today regarding this very Kickstarter. I interview Matt Finch at 10 AM EST tomorrow (Wednesday, Jan 28, 2020) on the Tenkars Tavern Discord Server. There will be further interviews with Frogs over the next few weeks on the Tavern Chat Podcast.


What is Swords & Wizardry?

Swords & Wizardry is more than a re-statement of the original rules that gave rise to 5e. It is fast-playing, easy to start, and easy to learn by anyone. Swords and Wizardry is  a snapshot of the rules as they existed in 1978 right before "first edition" was released. The fifth edition game currently played, watched and beloved by millions is great fun, but the structure of the rules has changed over the course of editions, and there's a unique feel to the earlier versions of the game which you may not have encountered before.

The rules in Swords & Wizardry are based on the original 1974 game, plus all of the supplements released from 1974 to 1978, articles in the Strategic Review and the Dragon magazine from that period, plus tips for house rules choices. The rules are organized in a more modern fashion than the original books, and are more accessible to those who started gaming after the 1970s.