Deal of the Day - Swords of Kos Fantasy Campaign Setting 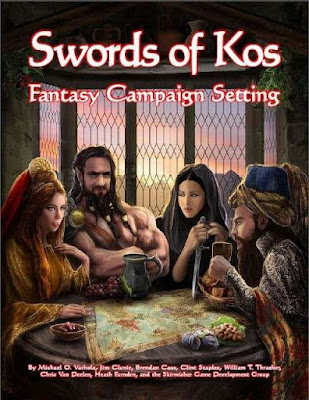 I've heard good things about the Swords of Kos Fantasy Campaign Setting. As a Deal of the Day special, I may just need to pick this up. Yes, I am a setting junkie.


Welcome to the Swords of Kos Fantasy Campaign Setting, a swords-and-sorcery milieu set in a Dark Ages fantasy version of the Mediterranean and the lands surrounding it! It is set a century after a Great Cataclysm destroyed the old world, plunged it into chaos, and reawakened magic and all form of ancient races and monsters. Now, the agents of Gods and Titans struggle against each other on behalf of their masters, nations strive to survive or dominate one another, and adventurers descend into the ruins in search of wealth and lost technology.

This universal campaign setting, which represents 14 years of development and has roots in the early 1980s, is ideal for adventures of the sorts inspired by the works of Fritz Leiber, Robert E. Howard, and Jack Vance. It has deliberately been designed to be system free and compatible with any set of role-playing game rules suitable for ancient, medieval, or fantasy venues. It is the "Bible" of its world and its contents can be used either as part of a cohesive milieu or individually to enhance other campaign settings or adventures, and both by game designers and writers interested in authoring fantasy fiction. In that this setting was used as the playtest backdrop for games using the OGL/d20, Pathfinder, “Basic” Dungeons & Dragons and Labyrinth Lord retroclone, and Advanced Dungeons & Dragons rules, it is an especially ideal setting for them.


Yep, there is an affiliate link above. Affiliate links keep the beer cold and the taps flowing here at The Tavern.