Far West released a "Backers Only" update yesterday. It is so full of excuses and misdirections I almost felt I was in an alternate reality.

Really. It was that bad.

After nearly four years of lies, misstatements and broken promises we now have revisionist history going on. Simply amazing. If it was set in a faux Western / Wuxia mash up we'd have the game written already.

Now, to point out the issues, I need to quote from the update.


As some of you are aware, I’ve issued a partial refund (from their original level, down to the digital-only level, to reflect that they’ve been receiving digital copies of the rewards (last we were told there's a few more chapters to be worked on))to a backer who filed a complaint with the Washington State Attorney General’s office. I wanted to talk about that in more detail.

The sole reason I went ahead and did this, rather than defend myself under the original Kickstarter terms we had funded FAR WEST under (which clearly stated that demonstrating good-faith progress towards completion [wrong - here's the section in question - Project Creators agree to make a good faith attempt to fulfill each reward by its Estimated Delivery Date.] was an indication that I was fulfilling my obligations) (https://www.kickstarter.com/terms-of-use/oct2012) is simply because I did the math and realized that I could not afford to secure legal representation in Washington. It was cheaper to simply issue the refund.

Since the backer in question went public with this news, though, I’ve had a handful of additional requests — and that’s what brings me to this update. I’m going to go ahead and talk about the stuff which I’ve previously refused to detail, preferring that it remain confidential. But maintain that confidentiality prevents you from understanding my situation, so I’m discarding it. Even so, I would please ask that the information in this backer-only update be kept between us. (sorry - no can do - misstatements of the truth must be addressed)

In 2013 (May 8th, 2013 was the announcement -  The FAR WEST Adventure Game core rulebook will be released this Summer, first to backers of the 2011 FAR WEST Kickstarter, and then to distribution world-wide. Additional releases in the FAR WEST game line will be announced soon), I signed a contract with the UK game company (Cubicle 7) I was working with, where they agreed to fund production beyond what I’d already paid for, and to distribute the game not only to you backers, but as a game line under their imprint.

In 2014, as you all know, I fell very ill (but he told Cubicle 7 it would be ready for release in Summer of 2013 - mere months after signing the contract), and spent about half of the year in and out of the hospital. Confident in that contract, I paid my medical bills. However, during my recovery, the company cancelled our contract -- leaving me with almost no funds to continue, or to hire an attorney in the UK to take up the breach of contract issue. I was, as you can imagine, devastated by this news. (as I am sure Cubicle 7 was when each month they were told "it will be done at the end of next week")

wait - here's an update from 2 years ago: 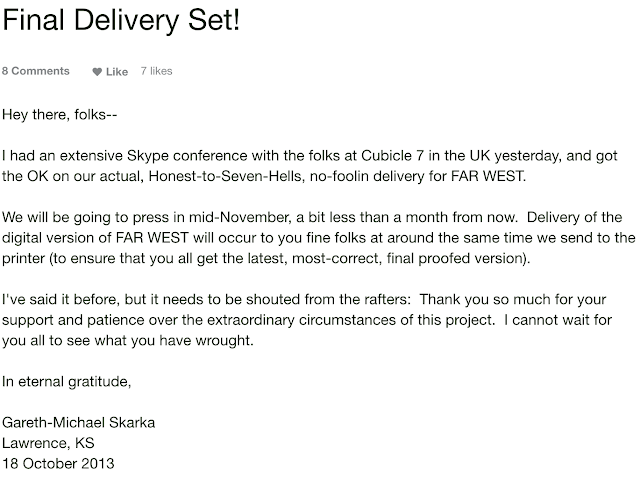 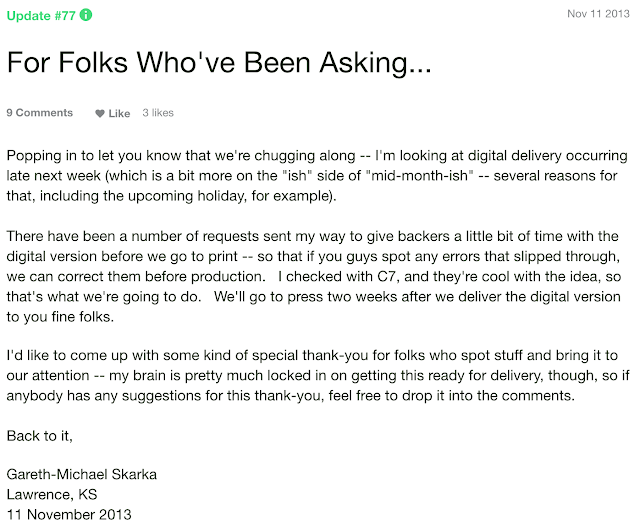 Look at the amazing progress. We were what, 2 weeks from digital delivery in November 2013 and then this: 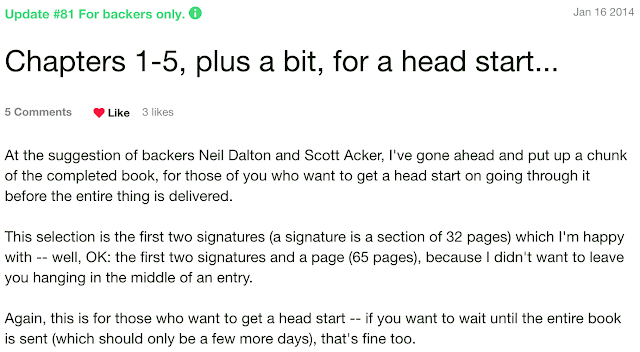 Two months later and only the first 5 chapters are ready. 20 months after the January 16, 2014 update and we still have a few chapters to go. Who breached what contract?


Now thankfully, in the year since, I have secured several private investors who have made the offer to fund the physical production -- although via this arrangement, I will make no money on the commercial sales of the core rulebook. (wait - didn't the Kickstarter for Far West raise nearly $50,000? Where did all that money go?) That's fine with me -- as long as you backers get what was promised, I have no problem with earning nothing for the core book. (again, you earned nearly $50,000 less payment and Kickstarter fees - you WERE paid and have returned with a project yet to be complete 4 years later) It is my hope that the supplemental releases will push the project into the black.

Now, I’m going to get back to work. I’ve got to finish these last few chapters.

Up is down and left is right. I backed this train wreck for 150 bucks. I'll never get value for my money so I may as well keep my readers informed.