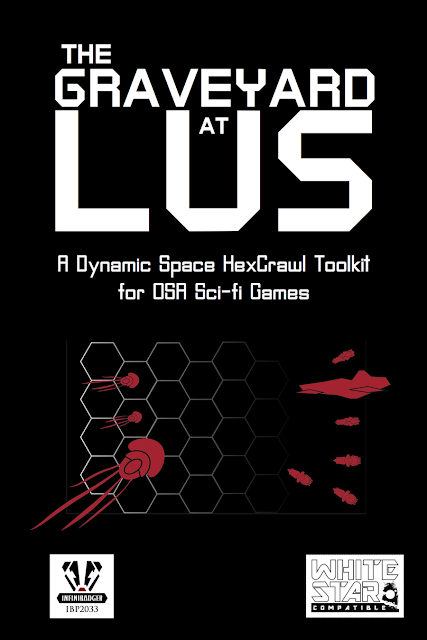 This summer has kicked my gaming ability solidly in the ass. I haven't played, let alone read, nearly as much as I would have liked to. So what does +Jason Paul McCartan and his InfiniBadger Press decide to do?  Release a nearly 60 page hexcrawl supplement for White Star - The Graveyard at Lus. It's massive. It has tables. It makes me want to jump in and use it right away. I still don't have the time to do so and this book just doesn't care.

I've barely scratched the surface of The Graveyard at Lus and it has me chomping at the bit.


Space Graveyards - what's left behind when battles are fought among the points of light that map out the universe. Sometimes there's good salvage to be had there. There's always danger, though. Not everything is dead in a Graveyard, and you're not the only one that come's lookng for the good stuff. And that's not even mentioning the radiation and debris left behind, or the dangerous creatures that end up finding their way there like graveworms and ... the undead.

Multiple tables for the creation of starship damage, system damage, and crew survivorship

Five new creatues, including The Unquiet, a horriffic form of undead

Use the pregenerated Graveyard At Lus for your own games, or as a guide to create your own Graveyards.

The Graveyard at Lus will be continually supported by the release of FREE expansion material that includes additional rules and other content, including new races, creatures, and tables to help support additional sandbox usage of the product beyond the core book here. The first of these will be the release of all of the silhouetts of the starships in the book (and many more) for use in creation of your own counters for table-based play or use with a VTT.

The POD version of the product will be available soon in 6x9 format. Those who purchase the PDF version will receive a discount of the full price against the print version.

There is an update coming that will include bookmarks for tables to make the product easier to use, as well as to correct some layering issues for the sample map, and some small corrections to readibility.

It's $4.99 in PDF and when it goes to print those that bought the PDF get a $4.99 discount on the dead tree version. Damn close to a no brainer.