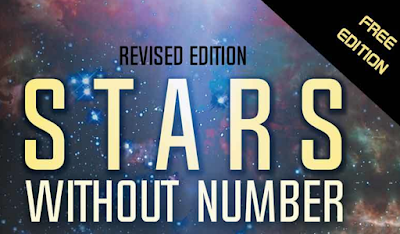 Stars Without Number - Revised Edition - "Stars Without Number: Revised Edition is an old-school-inspired game of sci-fi adventure, one built from the ground up to encourage sandbox play and simplify a GM's job in providing it. Familiar mechanics are employed to forge new worlds and explore new possibilities, guidelines built on long experience used to help a group venture in wholly new directions."

X-plorers - "Here is a simple RPG of interplanetary adventure, rules-lite, fast-paced, and inspired by a passion for science fiction. In X-plorers, you're part of a group of galactic troubleshooters on the look out for the next job-whether it be salvage, search, or rescue on an alien world." 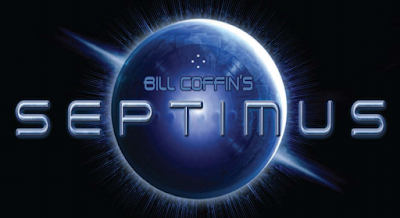 Septimus (d6 system) - "The game of Septimus takes place in a galactic civilization that has run its course and now Is going through an extended death spasm. This civilization Is the vaunted Seventh Empire, the greatest single political entity ever crafted by humanity."

Hulks and Horrors - Basic Black Edition - "We are the Surveyors. We explore the uncharted sectors of space and hunt these ruins for the treasures they contain and the riches they might bring to what sentient life remains. We are not brave, merely foolhardy and desperate. Those who survive become rich beyond dreams. Very few survive. Hulks & Horrors is a science-fiction roleplaying game of galactic exploration and adventure for 2 or more players ages 13 and up."

Cepheus Engine System Reference Document - "The Cepheus Engine System Reference Document comprises the core rules for a Classic Era Science Fiction 2D6-Based Open Gaming System. Inspired by the original three books of the oldest 2D6-based science fiction roleplaying game, the Cepheus Engine system incorporates elements of Open Game Content from previous releases of that game of intergalactic drifters and wanderers to create a basic system that will allow players and Referees alike to create their own science fiction universes or play in the ones they are already familiar with."

Cascade Failure - "Cascade Failure is a post-apocalypse future RPG. Set in the aftermath of a devastating war that collapsed the interstellar economy, Cascade Failure is a survival RPG that casts the characters out into a dangerous and hostile universe. The game is built on a rugged OGL chassis that is melded with a variety of new subsystems to round out your character. You can jump into unique character classes like the Kinetic that can move objects with their mind or into a unique alien species like the insectoid Sahael with a hardened exoskeleton and powerful mandibles for biting attacks."

TERMINAL SPACE - "In the beginning (these rules) were to comprise a separate game partially based on simplified Moldvay / Cook edition of the game and partially on my own solutions. After some thought, I came to the conclusion that my works would be better suited as supplements for the Original Edition. The aim of this publication is to add a new rule set to help transfer the game to an entire new dimension which is space exploration. Thus these additional materials were created with the thought of settings more heavily based on Sci-Fi and Science Fantasy genres than most of the materials created for 0e so far. Even though this supplement is not complete I hope that somebody will find it useful."

The Frontier Starter Edition - Inspired by action roleplaying games, such as Borderlands and Destiny, The Frontier is a sci-fi game of hi-octane action that focuses on the simpler pleasures of life. Explore the alien ruins of a faraway world, fight a ton of nasties and baddies, and collect a boatload of loot as your reward!
Note - There are some affiliate links above. Keep the taps flowing, the beer cold and the lights on here at The Tavern :)

Add comment
Load more...
Home
Subscribe to: Posts (Atom)
Tenkar's Tavern is supported by various affiliate programs, including Amazon, RPGNow,
and Humble Bundle as well as Patreon. Your patronage is appreciated and helps keep the
lights on and the taps flowing. Your Humble Bartender, Tenkar