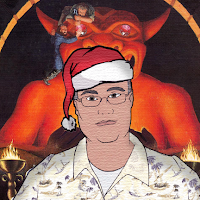 It's a week before Christmas and it's pretty much crunch time for a lot of people. Last-minute presents, wrapping what you already have, maybe one too-many holiday parties/obligations, oh, and the inevitable travel plans (even if it's people coming to you).

For me, my "crunch-time" is trying to figure out just how I'm going to get in all of my Christmas movies: Elf, Bad Santa, Bad Mom's Christmas, Scrooged, Miracle on 34th Street, A Very Harold & Kumar Christmas, Anna and the Apocalypse, How the Grinch Stole Christmas, Die Hard (I know it's not a...whatever), It's a Wonderful Life, Office Christmas Party, Christmas Vacation, A Christmas Story, Eight Crazy Nights (I know, it's a Hannukah film, but deal), Fat Man, Mixed Nuts, and the Guardians of the Galaxy Christmas Special (for the 4th time). I have some other Christmas movies, but I don't need to see .....every .....single .....one.

Now as far as the holidays and gaming intersect, I have rarely seen a GM/campaign that has regular holidays as a thing. My HackMaster campaign did (I can envision of few readers rolling their eyes.......of course HackMaster had holidays!), but to be fair I didn't use my calendar, but one provided by somebody else. He had this whole bit of math done up to track lunar cycles (three moons) and specific holidays based on intersecting moon phases with some set holidays. I took all the math and created an Excel sheet so all you had to do was enter the year and *poof* here's a calendar for the year with holidays marked. My campaign was set thousands of years after the destructions of the Old Gawds, so I had to use Excel to make it work.

Granted, since Christmas is a religious holiday, as is Hannukah, and the majority of RPG campaigns have multiple gods...so would there be a LOT of "Christmas" holidays? Or maybe there is a predominate religion in each region and only that one has a "Christmas"?

Since before modern times almost all of our/the holidays we had were religious, not secular...holy crap that would be a HUGE amount of holidays to figure out for a campaign calendar. I mean I think it could be fun to do all of your gods, but if you use the Petty Gods book (like I do/would), you might need to lump a few together or your calendar would be only religious holidays!

Now.....if I can find the time between Christmas movies (and other last-minute holiday tasks), I think I'm going to stat-up Santa Claus for OSR....I'm thinking a dual-identity Fae that is Sinterklaas/Krampus that is (unfortunately) real easy to strike a bargain with, but like all dealings with the Fae.....there can be issues.

Email ThisBlogThis!Share to TwitterShare to FacebookShare to Pinterest
Labels: holidays, not Erik