On The 21st Day of Free Holiday swag, My Bartender Gave to Meeeee! - Fates Worse Than Death, Spare Change Edition 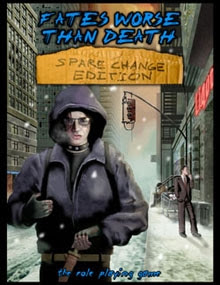 Hey, what can you say about a cyberpunk type game set 70 years in the future that lets you play homeless people and squatters?  It's almost like a futuristic game of OWS ;)

Alright, maybe not - but maybe so.  Fates Worse Than Death is over 280 pages for you to use as is or lift for your near future RPG of choice.  Did I mention its free?

This is a free light version of Fates Worse Than Death the Role Playing Game, from Vajra Enterprises (makers of Hoodoo Blues and KidWorld). Fates Worse Than Death is a game of violence, fear and hope on the streets of New York City in 2080.
Spare Change Edition is a complete role playing game, with everything you need to play. However, unlike the full version, the Spare Change Edition only has character creation options and setting information for creating and playing characters who are street people (squatters and homeless people, most of whom cannot get legitimate jobs and survive by a variety of illicit means).
Posted by Tenkar at 8:49 PM