Looking Back at the DCC Beta (and Forward too) 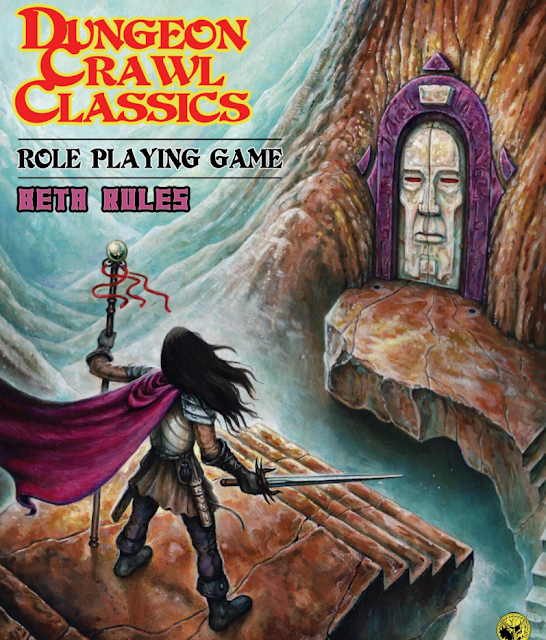 I just re-downloaded the DCC RPG Beta rules from the Goodman Games website and see they are dated June, 2011. Kinda makes sense, as the Goodman Free RPG Day 2011 release was for the DCC RPG and for use with the beta rules.

Holy shit but I was not impressed with the beta rules. I'm not 100% sure why that is, but I do remember my disappointment with the funny (funnier?) dice and the idea of the character funnel did not sit well with me.

Oh yeah. The charts. Overwhelming at the time.

Strange how I like the total package these days. Heck, preordered the rules when preorders opened even though I didn't particularly like the DCC Beta, mostly because I trusted Goodman to put out a good game. He did. The DCC RPG is a good game. Damn shame I'll probably never get my regular group to play it.

The size of the rulebook.

They would probably be fine with it after playing a session or two. The DCC RPG kinda get's it's teeth in you and you find yourself a convert. I need to get them to the table first, and convincing the others to invest the time (50 bucks now) and time in this tome is a hard sell. Especially to OSR players who are used to the try and then buy method.

So, I was thinking of directing them to the DCC BRPG Beta download, but I know the game has strayed from the beta a bit. Experience points is the one thing that sticks out mostly to me but I know there are other parts that changed. Did anyone ever put together a document that explains the changes?

I wonder how useful it would be to update the beta to the final rules, so less a beta and more of an introduction to the rules. It might be too labor intensive, but if not, it may be a great way to expand the DCC RPG player base. If you are going to do it, now is the time, before "Next" becomes the next big thing - or not ;)