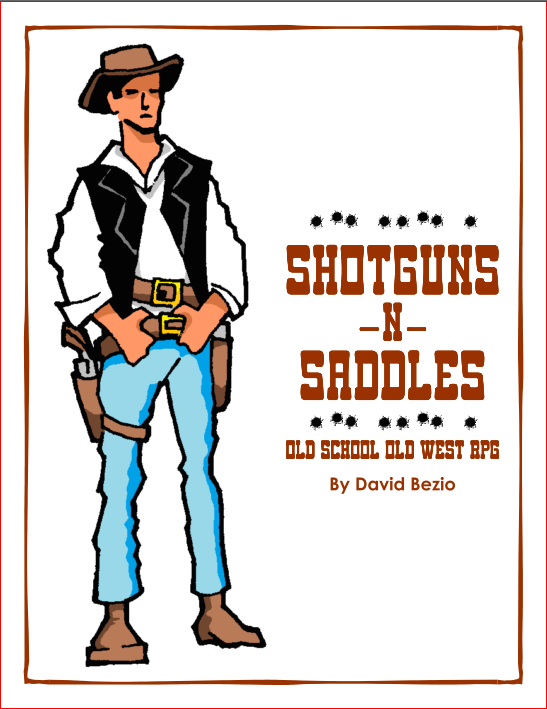 With Shotguns & Saddles, +David Bezio (he of X-Plorers fame) brings the American Old West genre to the OSR. There are some notable changes to the system most of use are familiar with, which is why I'm making this post a "First Look"and not a mini review (that will come later). I want to look at the core of the system David is presenting in Shotguns & Saddles.

There are 12 attributes in S&S, not the usual 6 (or 7 for the 2e crew). Athletics, Book Learning, Fighting, Frontier, Grit, Horsemanship, Perception, Presence, Shooting, Stealth, Strength, and Quickness. Some of them are obvious reskins of OSR attributes, others aren't. Rolls range from 3-18 which then get converted to a score from -2 to + 2

The Background table adjusts 2 to 4 of these attributes by +1 depending on your roll. A Teacher would get bonuses to Book Learning and Perception while a Railroad Worker would get Frontier, Grit and Strength.

How fast you more is determined by athletics and a high quickness will help with your Defense (kinda like your AC, but as you don't wear armor, it also gets better with leveling).

Hit Die size is determined by you Grit score.

There is even an alignment system, but it is labeled by hat color: White Hat, Brown Hat, and Black Hat. You can probably guess the generalities of how the hat colors are defined.

You also get a randomly determined Special Ability which helps differentiate your PC from the others.

So, much of the above seem familiar enough and I doubt the the transition would be all that hard. I'll review this when I finish my way through the rest of it. I'm really hopeful that converting some Deadlands stuff, at least in a general sense, shouldn't be too hard.
Posted by Tenkar at 9:42 AM