Some Thoughts on Blind Hero Worship


We have a Blind Hero Worship issue in the gaming community. The problem isn’t unique to RPGs, but it is very prevalent in old school gaming.

Surprise! Those memories aren’t as perfect as you think and neither are your heroes. And that’s okay.

Game designers are people too, like you and I, and putting them on pedestals they are ill suited for does neither them nor the community a favor.

Sticking fingers in your ears and going Ting a Ling a Loo isn’t going to change the truth about your heroes being mere mortals.

As an aside, 9 more pounds off at this mornings weigh in. 41 pounds in total in seven days. I’m guessing 10 more before all is saiid and done.
Posted by Tenkar at 9:19 PM 5 comments: 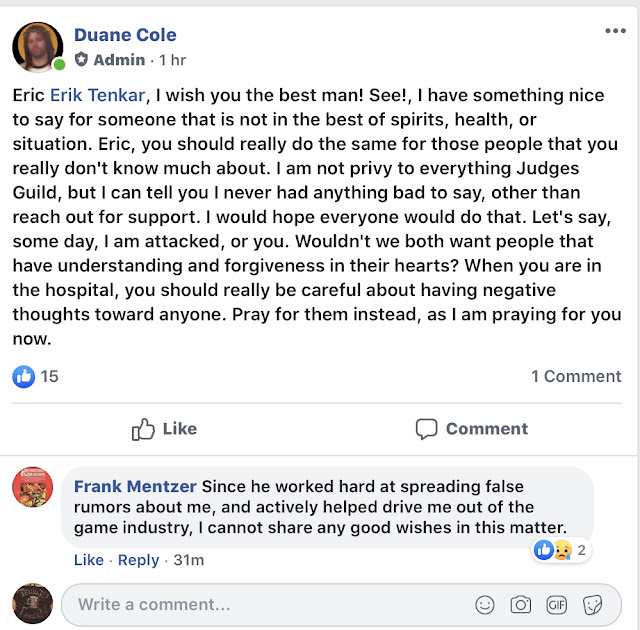 Should I make it home, I expect to hold the torch high as ever before. Should I fail, I pray someone picks up the torch and forges their own path.
Posted by Tenkar at 10:28 PM 11 comments:

State of the Tavern Keeper - Peed Away 10 Pounds and Going 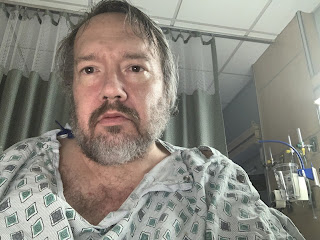 Still megadosing furosemide. Peed about 1/2 a gallon between lunch and dinner. Goal is one to two gallons per day.

Monday or Tuesday should be The Stenting. Multiple stents for multiple blockages.

The Temptation is There...

To simply quit posting for a few days. I had an MRI of my heart today (angioplasty yesterday) and have been told we won’t even be making a decision on how to proceed until Monday /  Tuesday at best - because I still have a few gallons of water to piss out first.

Ah well. Maybe there is a hornet’s nest I can kick over tomorrow ;)
Posted by Tenkar at 8:56 PM 3 comments:

Today’s procedure revealed some blockages in the heart.

Tomorrow, an MRI for further details.

Backers and Friends (I hope we still have some), as help from other sources never seem to come forth as promised, the going is slow, but I have not given up. Progress is being made and print funds are still being raised. This is largely due to our new website store and new book (Badabaskor) financed by son Aaron Bledsaw, who is granting 50% of the proceeds from the site to the CSIO/KS print-fund.
Also, additional material is still going into the CSIO from Bob Bledsaw's own material... if you see how Badabaskor has expanded from 30 to 70 pages, the material used is much of the same which has added an additional 30+ pages to CSIO. This material is Bob Sr's unfinished draft material, edited of course. Those of you who would like to see samples of the expanded Streets can email me at jgww@comcast.net, and I will gladly drop a large Street (text only) for you to see. Maps (interior) and artwork is also being polished and cleaned by Aaron Bledsaw.
I wish you all to know that I am not squandering any cash here, nor have I used any Judges Guild cash for my own purposes since 2015. I had a cardiac incident in 2018, and have not sought treatment, my sole vehicle quit on me in 2018, so I did not have it repaired, I need eye surgery, but rather than have it, I did not renew my drivers license the same year. I have not driven in 2 years. Also in 2018 the furnace in my home quit, it too has not been repaired, and in 2019, my water-heater stopped lighting... so no, I am not spending the cash for anything here until this project is fulfilled. This is me being honest about my situation, I do have a modest living, and anyone who doubts this can ask my immediate family. I tell you all this because I am in your debt, and you should know how I do thereby.
I was asked to address allegations that I am a racist (I am not), or if I am an anti-semite (again, I am not). Anyone who sees the posts they selected for that narrative ignored the many other posts made to the contrary. There are many reasons to rake me over the coals, and I understand that, but anyone who knows me, or with eyes to see, can be judge. Just because I criticize, jest, or lampoon, does not mean I am any of the things I am being labeled as. If all you see are those selected posts, and ignore that those posts were liked by others, you will be angry. Give me the space you afford Mel Brooks. (and they will run with that quote also). As it is, I run the Guild as my father instructed me, non-political, non-biased... so years back when the LGBTQ asked us to openly endorse them as other companies openly did, I refused, and maybe that marked the Guild in the modern climate... it had nothing to do with my personal position, in fact, I posted that we make games for everyone, why choose sides on an issue like that? So, I guess that was not enough and I was informed in 2016 that the Guild was labeled an "Orange Business" (meaning a pro-Trump pox). I tried to inform people that I did not support Trump, but as my personal wall showed posts critical of the Left, some just assumed I was a liar. I did make insensitive posts, but a search of my wall shows jabs at everyone; preachers, popes, musicians, politicians, AND Trump!  In 2014 I created a Photo Album on FB singing the praise of my favorite Blues musicians, many are black, and yet they would rather see me as Hitler for a few critical posts. As I said, all those posts were liked my someone, so we are talking "taste." I can accept that I am in bad taste sometimes.
Again, I ramble, and I would update more if more was to tell. If you re-read this, you will see how the Guild is doing... for the last 10 years, other companies have made money on the Guild, but that has changed. Our sales are up on the new book, and Aaron has others soon to be released, when he has the capital to print. I hope you all do give those books a chance. Reviews have been very good so far, and that is encouraging to me as to how you will like the City State, as it draws from the same Bob Sr draft material. The fact that it is being well-received and re-ordered, tells me that using it as the filler was the right move. I do believe you will be happy with the words.
Please remember to update your addresses, this will get done!
Some of the minis are yet to go out, if you wish them sent prior to the book, send me your address along with backer # and I will send them in order of request. Otherwise. they will be mailed along with the printed book and maps. Also, any other issues I can help with, feel free to ask, I will help as I can. My health is not the greatest now, but if you consider the sacrifices I have confided to you above, you know my heart is still with this project, and seeing it thru. All the polish will show.
Sincerely,
Bob Bledsaw II 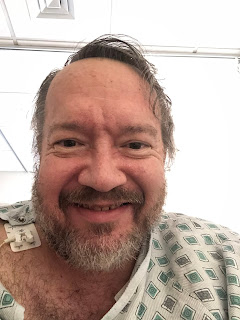 Yes, it’s been awhile since I shaved. At least my hair was combed. ;)

Tomorrow or Tuesday will be the procedure to look at my heart from the inside. Need to pass more water to get to that point. Yes, knots of peeing.

I’ll keep you all updated.

Email ThisBlogThis!Share to TwitterShare to FacebookShare to Pinterest
Labels: state of the tavern keeper
Newer Posts Older Posts Home
View mobile version
Subscribe to: Posts (Atom)
Tenkar's Tavern is supported by various affiliate programs, including Amazon, RPGNow,
and Humble Bundle as well as Patreon. Your patronage is appreciated and helps keep the
lights on and the taps flowing. Your Humble Bartender, Tenkar