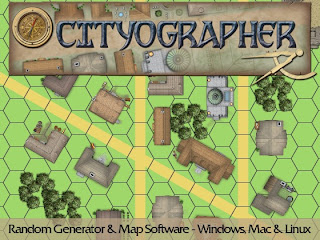 You know what's funny?  I actually forgot I had licenses for both Dungeonographer and Hexographer.  Kinda happens when you change from Windows to Mac and figure 95% of your stuff won't port.  Well, surprise surprise, the mapping programs from Inkwell Ideas install to either OS.  It just took the Cityographer Kickstarter to remind me I had the other mapping programs.

Both Dungeonographer and Hexographer give you random maps that you can tweak (and you can tweak before the random part too).  As I said in my last post, I can't draw a map to save my life, so these two little programs can certainly be game savers for me.

Cityographer is no different.  Or maybe it is different, because it's cities and not dungeons or wilderness.  Still, it's there to help the GM, and as I'm finding, I need all the help I can get.

Here's some words from the Kickstarter:

Do your players ever take a game session in a different direction and you need a quick city or village?  Or maybe you want to cut down on your game's prep time by getting some help creating some of the cities or villages in your game's setting?  (Whether you want the system to do 90% of the work or just 20%--customize the results as much as you want.)
Cityographer is the perfect solution for these situations!  You set some preferences for the city you want (technology level, population size, whether the city has a river, if it is on the coast, etc.) on a setup screen and it will randomly generate an entire village or city for you.  (You can also start with a blank map/city.)
Not only will the program generate the city's map, but it will generate simple floorplans of the buildings, and each building's residents and any important belongings.  If the building is a business you'll also get a list of the staff and a menu or price list of products available.
Further, everything and anything can be fully or individually re-generated or hand edited!  So if you don't like the whole city, just start over.  But if you simply don't like the placement of a few buildings, move them or delete them and add new ones.  If you don't like a particular building just regenerate it or an aspect of it.  For example if the building is an inn, regenerate it or regenerate just the staff or just the price list or hand edit any particular item!
I think I've become a Kickstarter addict ;)
Posted by Tenkar at 11:19 PM