Mini Review - Toys For the Sandbox #22 - The Ritual Space 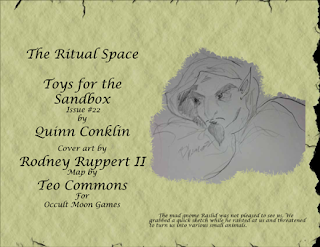 It's been a while since I reviewed a release in the Toys for the Sandbox line (Heck, they've even added a Sci-Fi line while I've been so neglectful).  At least it's fitting that when I rerun to it, it is hitting all of it's high points.

You know the drill:  The Ritual Space has six possibilities each with three unique twists, so there are 18 ways to play this out.  Would you be surprised if I told you that The Ritual Space deals with "a ritual"?  Yep, it does, but there's more going on than meets the eye.

Hmm, actually, Ritual Space has more than 18 possibilities, as in this release, you can easily have more than one of the possibilities in play at the same time.  Yeah, I'm already thinking of ways to drop this in my ACKS sandbox.

The map, BTW, is extremely well done.  It works as both a map and a piece of art. I'm finding myself verity partial to maps that can double as art after reading the released in the DCC RPG line.  While this map in much simpler in nature than the DCC maps, it's dual nature as a piece of art is much appreciated.  Teo Commons did the map apparently.  Well done Teo. :)

Toys for the Sandbox is not a module, it is not a campaign setting, instead it is a framework for GMs to use to reinforce their own imaginations. Sometimes players zig when you expect them to zag, other times they take your plot point into a back alley and leave it penniless and bleeding. Each week we present a new location with a map and some flavor text. In addition we add 4 NPCs with a bit of history and a few simple thoughts on how to stat them for whatever game you are playing. There are also 6 plot hooks each with 3 ways to twist them. Added to that there is usually a table or two filled with rumors and encounters.
In an old dark forest far sits a clearing where nothing will grow. Here long ago a sorcerer from another world began a great ritual. Now he is imprisoned but his mad apprentice wishes to finish it. But he is not the only one. The god-king wants to use the ritual to gain more power. All that stand between them and the last steps of the ritual are the Forest Wardens, an unfinished magic sword and perhaps your party.
Posted by Tenkar at 7:54 PM