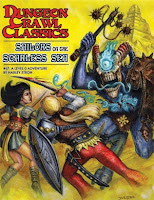 It looks like I'll be recruiting for a 2 session Dungeon Crawl Classics RPG Arc.  The post will probably go live on the UA-LC site tomorrow (sunday).  So, yeah, I guess you could say UA-LC is kicking off officially very shortly. ;)

I know we have a few folks that are looking to run games via UA-LC.  I'm going to scour the postings over the weekend and reach out to folks, but feel free to toss your hat in (or remind me and Mike that your hat is tossed in) and we'll get this party started.  The key is to keep things staggered, as the idea is to allow the GM a few weeks off between Arcs (if they so desire).

I'm heavily leaning toward running Traveller: Cowboys & Xenomorphs for my second arc.  That is, assuming I don't have an overflow on the DCC RPG arc.  If I do I may just have to run that a second time (which can't be all bad, as at least with the second round I'd have some DCC experience behind me ;)
Posted by Tenkar at 9:24 AM