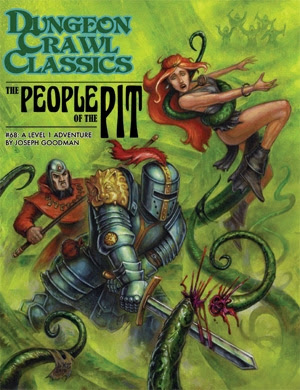 I've long been a fan of Cthulhu Mythos in my Fantasy RPG gaming.  It keeps players honest ;)  The creature that is the main event in People of the Pit is certainly mythos inspired, and that is a good thing, as it is pulled of perfectly.

DCC #68 breaks with recent tradition, as it is 32 pages long (30 pages after front and back cover are removed from the count) and I can easily see this taking a session and a half or even two to complete.  You do get a nice amount of gaming for your investment.

I'm trying to think of what I can say about People of the Pit without giving too much away.  Lets see, there are deformed cultists, there are some new creatures for the PCs to kill (or be killed by), there is the tentacled beast on the cover (I think the cover fails to covey the actual terror this tentacle beast is).  Oh, and a TPK is certainly possible.  I don't want to say likely, but more likely than the previous adventures in the series or in the DCC RPG book.  It will certainly weed out the men from the boys.  Or women from the girls.

If I have one complaint, its the art.  As far as I can tell, there are no prints available for any of it!  It's not like I'm going to print a piece of with my inkjet and hang it on my wall.  I want professional art prints damn it!  The player's handout for area 4-9 NEEDS to be a print.  The maps need to be available in prints.  Joseph, how many peasants do I have to sacrifice to the Funnel before we can get some of this art work available as prints?

Did I mention it is a fully bookmarked PDF?  Well done.

People of the Pit is a 1st Level Dungeon Crawl Classics RPG adventure.  It's a great piece to put your funnel survivors through from DCC #67 - Sailors on the Starless Sea.  Well, so long as they aren't too worried about surviving to level 2 ;)

It has been years since the last virgin was sacrificed: and now the pit beast awakens once more! Every generation it stumbles forth on undulating tentacles from its resting place deep below the great ravine, its towering blubbery mass ravaging the land before returning to slumber for decades. But this time is different. The Great Beast strikes with intelligence: bands of faceless gray-robed men emerge from the tenebrous depths, herding the beast’s roaming tentacles before them. The enigmatic people of the pit live despite the passage of ages! The earth shakes each night as they herd the primordial tentacles ever further, while the villagers ask: is any man brave enough to put the sword to this menace?
Posted by Tenkar at 9:38 PM